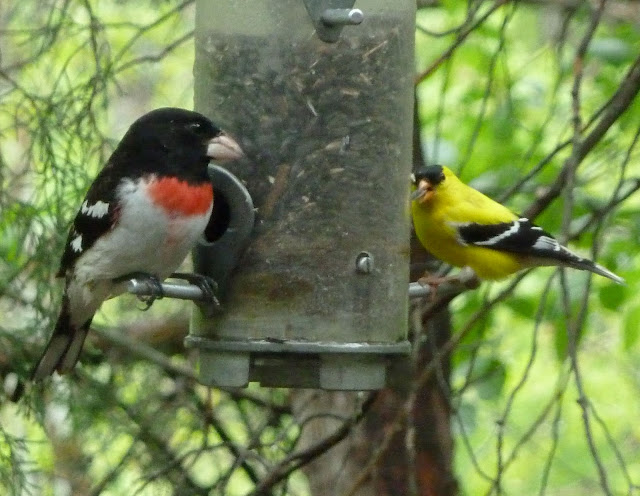 At lunch today we were talking about which birds win at the battles over our bird feeders.  Aside from the long-tailed not-a-bird that we yell at, there is a pecking order with the red-bellied woodpecker on top and our poor Carolina chickadee usually coming in last.  In between it is harder to tell who wins in beak to beak combat.  Then I saw the latest issue of Cornell Lab eNews with a report from a team of researchers that kept score, describing the ranking of 136 common species' dominance at the feeder.  It turns out that while bigger is better, it doesn't always trump guts and strength.  You can see the scorecard here.

A companion article describes How Birds Survive the Cold.  Actually the factors sound a lot like a doctor's advice on winter health in a newspaper column. 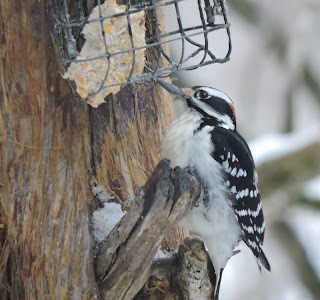 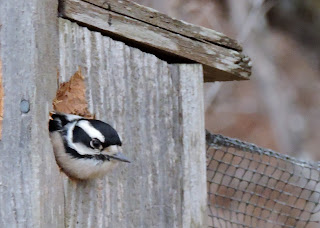 A WOLF school student's presentation on stick insects, (Phasmatodea aka walking sticks) sent me down a rabbit hole of researching these incredible insects.  Aside from color and size variation of our local sticks there is an incredible diversity of species across the globe.  Here is just the tip of the iceberg.

When we see an adult walking stick on our level it usually means it was blown down from the upper leaves of a tree or dropped to escape a predator.  Being lightweight, they usually survive the fall without damage.  If you try to pick one off a tree or the side of your house, watch how quickly it can drop.  This is just the beginning of its tricks.  Some stick insects can auto-amputate a limb to escape the grasp of a predator.  This is called autotomy and some species can regenerate the sacrificed leg over time.  Other species have defenses such as toxic chemicals, spines on their legs, or bright colored wings that they flash to startle a predator. 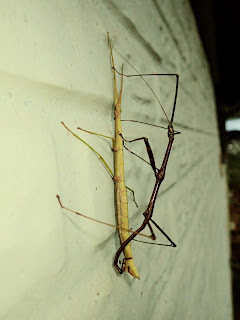 Our giant walking stick, Megaphasma denticrus, is the longest insect in North America.  It occurs in the southern and midwestern United States.  Males are rare, as few as one per thousand females.  In spite of these odds, finding a mating pair is common.  One reason is that once they mate, the male clings on for hours or in some cases days.  This behavior prevents other males from competing for the female's attention.  Some evidence suggests that it also improves the male's chances for successful offspring.  If a predator comes along, the male is more exposed and may be sacrificing himself for the cause.

Some species of sticks like our M. denticrus  can reproduce by parthenogenesis, meaning that they don't require males to produce fertile eggs.  These offspring are all females so genetic diversity still rewards male fertilization in the long run.  Eggs are dropped randomly on the fall forest leaf litter and the young nymphs are left on their own to emerge in the spring, lighter colored miniatures of the adults.

Some stick insect species have an fatty treat on the end of their eggs, called a capitulum.  Ants will pick up these eggs and take them to their nest where they eat the treat without harming the egg, a behavior called myrmecochory.  In the spring the stick nymph chews its way out of the egg and crawls out of the nest to find a nice juicy leaf.

Finally, there are invasive species of walking sticks in California.  The Indian walking stick, Carausius morosus, has become popular in the pet trade and schools.  They are parthenogenic, producing offspring without mating.  Since they too shed the eggs on the ground, they get spread when a cage is cleaned.  They can be identified by the distinctive bright red markings on base of their front legs.

More from the rabbit hole?
Check out the Lord Howe Island stick insect, called the "rarest insect in the world" and known locally as a tree lobster.  The story is at this NPR Link.

A giant walking stick is "running" in this video.

Walkingstick or walking sticks - which is right?  Most sources say walkingstick but since this is a common name there is variation, sometimes in the same article.