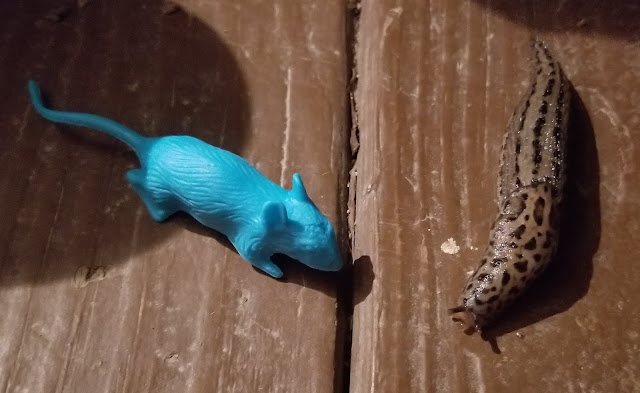 This story is from Alee Huerta who has returned to the MN fold after an absence while pursuing her education.

This past weekend we had a Leopard Slug crawl across our porch. My 1st thought was to grab the salt... and I did.  But as my 7 year old buddy and I plopped down with the salt, my inner Naturalist was like.... "hold up."  I'm glad I took the time for education because I found out that these slugs don't actually destroy living plants, a common misconception.  Leopard Slugs (Limax maximus) eat fungi, rotting plants and even other slugs. They need to keep their bodies damp in order to breathe, so are usually found in dark, damp places, particularly among rotting logs.

All slugs are hermaphrodites, meaning that each slug has both male and female sexual organs. They still need to mate with another individual though and LS have quite a spectacular way of doing this. The two slugs climb a tree or other structure, then hang from a branch on a thick strand of mucus, intertwined with one another.   Their sex organs protrude from their heads and intertwine to exchange sperm.  These are bluish colored shown in the photograph.  Editor's note:  This is a family blog but we will recommend this graphic BBC video as it is narrated by the very proper Richard Attenborough. 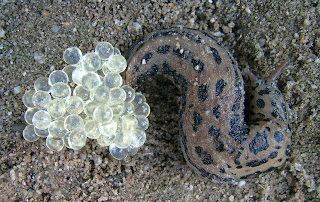 After mating, each slug lays clutches of transparent, round eggs in damp places.  As slug babies, they are a primary food source for lightning bugs! I love lightning bugs, so the way I see it, to love any one certain thing you need to respect everything that one certain thing needs.  They reach sexual maturity in 2 years and can live for 3 years.

Limax maximus, literally biggest slug, originally were native to Europe and Mediterranean countries of Africa and were first found in Philadelphia in 1867.  In spite of their top speed of 6" per minute they really get around and are now found around the globe! They are almost always found near human habitation — usually in lawns, gardens, cellars, outbuildings or in other damp areas.

LS is generally a nocturnal slug that feeds mostly on rotting plant matter and fungi as well as other slugs. In Texas and Oregon it can sometimes be a pest of gardens, greenhouses, cellars, and mushroom beds.  On the other hand, by eating dead and rotting plants, as well as fungi, Leopard Slugs recycle nutrients and fertilize the soil. 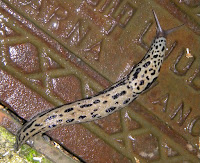 Our LS like many other slug species have a small disc of shell inside their body. Slugs evolved from snails and this disc is a remnant of what used to be the snail’s shell.  They can come in a wide range of shades although these leopards never change their spots.

Finally, research by Christie Sahley and colleagues have demonstrated associative learning in LS by aversion therapy.  Carrot and potato juice normally attracts them.  After they have been exposed to them flavored with an additional bitter dose of quinine sulfate, these attractants subsequently lose their gustatory charm.  Yes, it appears you can teach old slugs new tricks.
========
Dr. Chris Barnhart and MDC have just published Land Snails and Slugs of Missouri, available in many different formats at this Archive link.  You can download it as a PDF or Kindle document.
Posted by Bob and Barb at 7:53 AM

This is the time of year our forest floor becomes littered with small tree branches with a distinctive break at the end.  They look like they have gone through a blunt pencil sharpener, ending in a jagged tip.  This is the work of twig girdler beetles, Oncideres cingulata.  These are long-horned beetles of the Cerambycidae family. 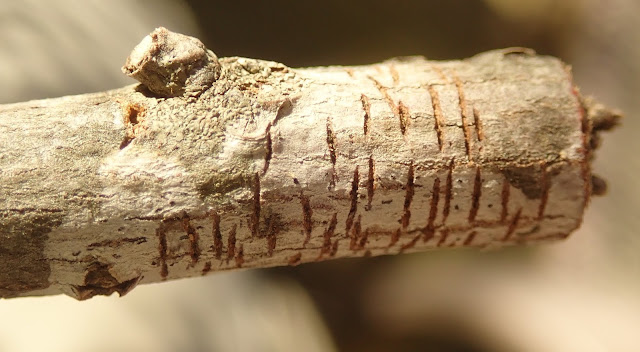 In the summer after mating, the female straddles a small branch and chews a V-shaped groove in the outer portion around the twig, leaving the center portion intact.  Her feet grip the tender bark, leaving a series of horizontal grooves in the distal branch.

Next she chews a small hole in the bark of the outer half of the branch and deposits an egg under the bark.
The eggs are long and narrow, fitting into a tiny hole usually at the site of a side branch.

Each female deposits 50 to 200 eggs which hatch in about 3 weeks.   OKstate.edu

This will be her offspring's home until next summer, slowly enlarging its chamber while living in its woody poop (frass for insect connoisseurs).  Her larvae require dead wood to develop and the cut effectively cuts off the twig's circulation.  They cannot fully develop in green twigs with high moisture content.

The legless grub will live in the twig all winter whether it falls to the ground or occasionally dangles from the tree. The chamber hollows to provide a winter home as the grub rests.  It starts feeding again in the spring and grows up to an inch long, living in a world of its frass which provides some insulation.  Eventually it chews an exit hole for the future, then pupates in the frass before emerging as an adult beetle in late summer.

You can see some of the action in Dr. Chris Barnhart's video here.  Meanwhile a couple of beautiful final portraits from Chris of the emerged adult, Oncideres cingulata.
Note: 2013 blog updated with video. 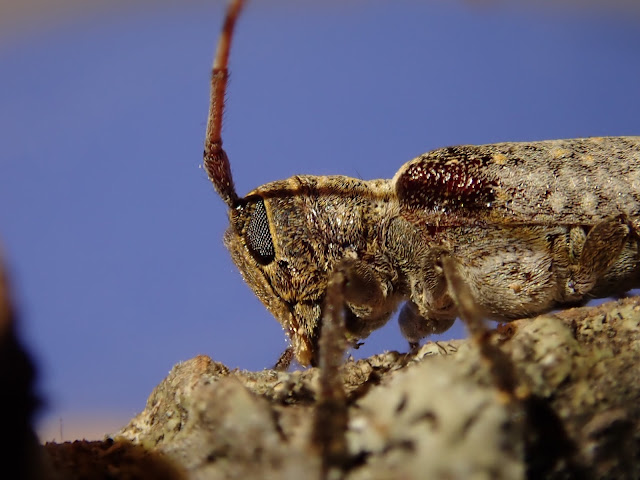 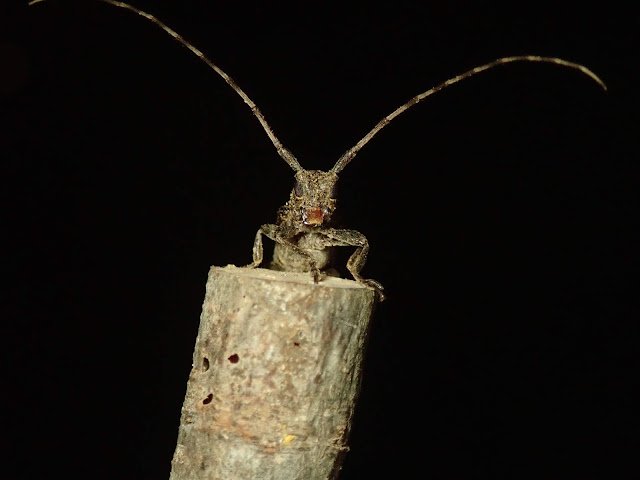