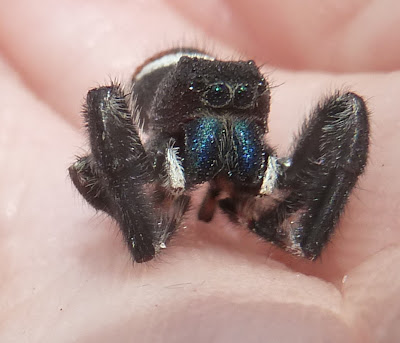 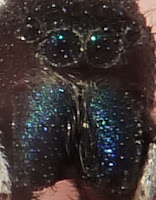 The picture on Friday's blog is a facial view of a spider showing two big eyes like headlights, two smaller eyes to the side (turn indicators?) and four small eyes across the top.  Taken with my pocket Lumix, the picture lacks the clarity of the big league photographers but I suspect some of you recognized it as a spider.  The blue-green structures are the chelicerae, hollow mouth parts which connect the venom glands to the fangs at the tips.

Kevin Firth emailed within 4 hours with an ID as a jumping spider of the genus Phidippus.  I was amazed because spiders are tough except some of the more distinctive species.  I have contacted a lot of entomologists over the last few years, and even they sometimes ask if I know a "good spider expert."

Some species can be narrowed down by their web construction, habitat and body shape.  My specimen jumps dramatically, which is how I spotted it in Brian Edmond's dense prairie plantings. The final ID as red-backed jumping spider, Phidippus clarus, was made from browsing through jumping spiders in Bugguide, and comparing each with my full body photograph. 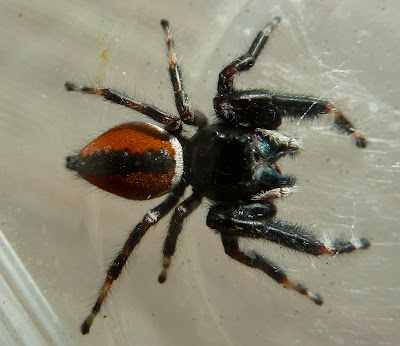 There is a lot of information on P. clarus on the web, particularly on Wikipedia.  Some of it is highly technical but there is also a lot of gee-whiz facts.
All spiders have silk glands which we associate with webs but some have adapted them to other uses.  The jumping spiders make silk shelters for protection of their eggs and a safer place to hang out while they are molting.

You can see a video of male and female P. clarus on this rkwalton.com link.  Arachnophobes beware.
An extensive collection of jumping spider videos can be found at this Dick Walton Natural History Services link.
Posted by Bob and Barb at 1:28 PM