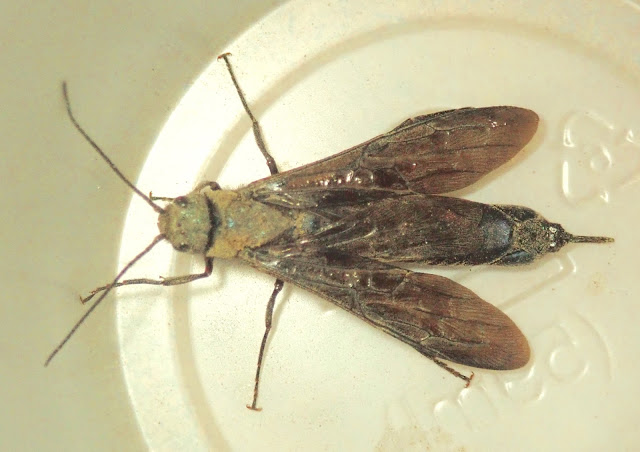 This insect caused quite a stir when found on a tree at the WOLF playground because of its prominent "stinger."  Although it looks dangerous, it is actually harmless unless you happen to be a tree.

This is a horntail wasp of the Siricidae family, another example of a wasp without a stinger.  The 20,000 plus species of solitary wasps do not have stingers.  Social wasp females such as the yellowjacket have their ovipositor modified to sting defensively, delivering a dose of venom to remind you of it for longer. 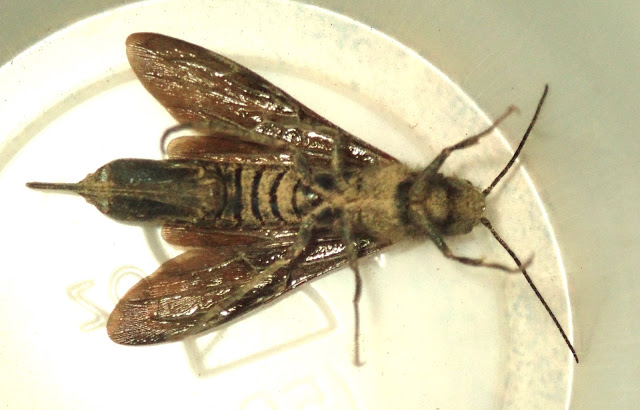 Siridicae's "horntail" seen above is really decorative, of no known purpose except to scare us.  The female's ovipositor is beneath and much more flimsy looking.  It uses it for the original purpose, in her case injecting an egg into wood.  Imagine the pressure required to push a pin or needle into wood and compare it to the lightweight wasp body.

The ovipositor overcomes the weight problem by mechanics.  First, the ovipositor lies inside a sheath that absorbs most of the pressure.  She will probe the wood in several places, finding a soft spot to inject the egg with fluid.  It contains a fungus that she carries in an abdominal opening.  The fungus will attack the wood while the egg matures, providing the newborn larva a predigested meal.
The story gets even better.  Many species of horntails have zinc in their ovipositors as well as in the adult's jaws, hardening them for chewing out of their wood incubator when they emerge as discussed in this previous blog.  In addition, the horntail ovipositor design has inspired new medical instrumental technology as described in Materials World Magazine:


"The wood wasp’s ovipositor looks like two hollow needles, one inside the other, each of which is lined with backward-facing teeth to give purchase as the wasp ‘drills’ progressively into the bark of a tree. This takes surprisingly little force, making it attractive for carrying out minimally invasive procedures such as brain biopsies without having to exploit a natural orifice."

The only significant damage they cause is if a board used in your house construction contains the larva.  When the adult emerges from its pupa it will chew its way out through wood, plasterboard or even a plastic covering.  Please forgive it and understand what a cool insect is visiting your house.
===
More at blogs by Bugeric and the Bug lady.
Posted by Bob and Barb at 3:48 PM