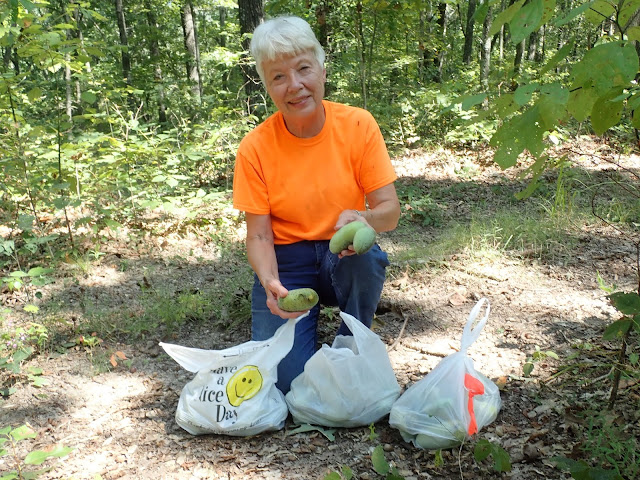 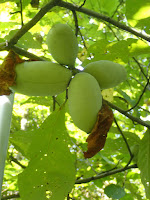 This week we had a record harvest of fruit on the pawpaw trees growing along the trails.  We ended up with 17 pounds, 4 times our average year.  Many of the biggest ones were hanging in clusters.  We go after them with a long pole with a hook on the end, pulling down all we see.  We have learned that when you think you have reached all of them on the tree, give it a good shaking and more unseen fruit is likely to come raining down on your head.

Pawpaws have a tight green skin, firm until they ripen, then soft, squishy and  full of the sweet odor of a over ripe banana.  Inside, there is a pale custard-like pulp with several brown seeds.  Fortunately those characteristics make some people dislike them which means more for us.  The pulp makes wonderful pawpaw pudding, the consistency of a moist cake.  It also can be used for pawpaw bread or served on top of ice cream.

The pawpaw tree (Asimina triloba) is much more important for wildlife.  Their fruits are popular with squirrels, raccoons, and bears.  In season we see bear scat filled with seeds, the pawpaw tree's method of transporting its offspring out of the neighborhood.

Pawpaws bloom early in spring and sudden freezes turn them into shriveled dark brown blobs, robbing them of the chance to make fruit.  Their survival trick is to spread out their flower bloom times.  We have noticed over the years that the flower blossoms develop and open up sequentially over 4-6 weeks in the spring.  On the same branch there may be shriveled frozen buds, tight buds both ready to open and fully opened blossoms, the whole spectrum on a single tree.

Pawpaw also reproduce by suckers, roots extending out to establish trees nearby in an expanding community.  Left alone they could cover a large area but as a forest matures over years around them, their expansion is controlled.

Like other species producing dark brown to purple flowers, the pawpaw flower smells bad, somewhat like rotting flesh.  This attracts insects that normally seek out dead animals.*  Their flowers are pollinated in a hit and miss fashion by flies, beetles and other species.  In some limited attempts to grow pawpaw commercially, growers actually hang dead fish and other lures to attract these morbid pollinators to their trees.

All of these insects are important to the pawpaw but one that totally depends on it is zebra swallowtail caterpillars, Protographium_marcellus.  They can only eat pawpaw leaves.  If these trees disappeared, so would the butterflies.

Several years ago I was out in the woods and checking a number of pawpaw trees.   I found a few leaf buds opening and then felt the sudden thrill of discovery.  There, on a tiny unfolding leaf, sat a glistening pale green egg of a zebra swallowtail.  A female zebra swallowtail very carefully lays an individual egg on the underside of a leaf.  It seems to know that its offspring don't play well together so it lays only one egg per leaf.  When the zebra caterpillar emerges, it eats the egg case for energy, and then may eat neighboring eggs if they are available.  Since the only likely species on a pawpaw are zebras, it doesn't pay to invest the energy in eggs that will not survive.  It is interesting to contemplate how this trait occurred.


*Further information on pawpaw odors is in this paper.
Previous pawpaw blogs have covered zebra swallowtail eggs, the  butterfly's premature delivery and the Asimina webworm moth that lives curled up in pawpaw leaves.
Posted by Bob and Barb at 5:41 PM