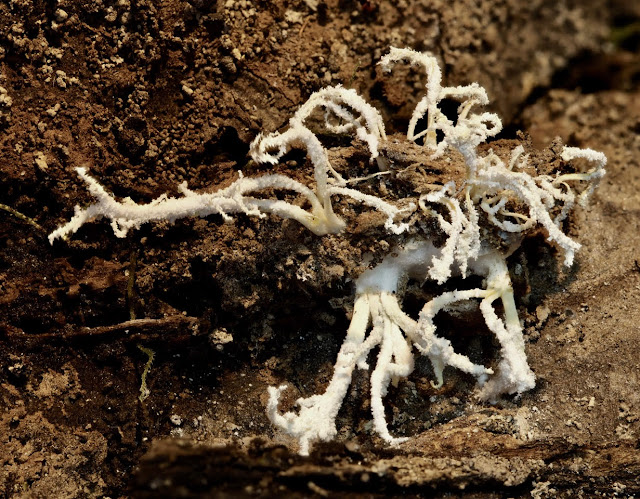 During a recent WOLF School field trip at Bull Creek, one of the fifth graders turned over a rotting log and discovered the grisly crime scene above.  By carefully excavating it, he exposed the remains of a lepidoptera pupa case, its contents consumed by a parasitoid fungus. 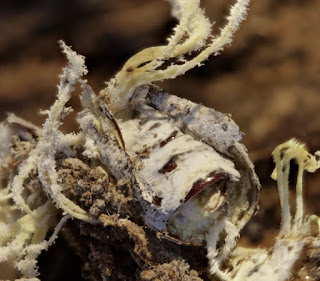 These white powdery structures are the fruiting bodies of an entomopathogenic fungus, Cordyceps tenuipes. (Greek entomon=insect).  If one of its spores comes in contact with an unlucky moth or butterfly pupa or larva, it will germinate, penetrate the cuticle and then grow inside the host. This eventually leads to the death of the insect. Then the spore-bearing fruiting bodies emerge from the cadaver.  Remnants of the victim can be seen in this photo.

There are a great number and variety of entomopathogenic fungi. In fact, 5 of the 8 fungal phyla contain species which have evolved to feed on insects.  C. tenuipes and some other species have been studied for possible medical applications which are popular in China.

A common Cordyceps species is C. militaris which Mark Bower shared with me.  Michael Kuo of Mushroomexpert.com describes it as "pretty much the coolest mushroom ever," but to identify it you need to dig a little deeper.  It parasitizes puffball mushrooms as well as insects, so simply plucking it from the ground leaves the underground origin a mystery.  In general it is always a good idea to dig down when collecting any mushroom because the substrate may help you identify it if only to know that it grows on wood.

Some species simply enter their host and devour it from the inside.  Incredibly, a few species can infect the creature’s brain and muscles and compel it to perform certain tasks.  For example, Ophiocordyceps unilateralis and C. lloydii fungi may direct an infected ant to climb a tree to a specific height so that the fungal spores will rain down on the unsuspecting ants below.  In an example of familiarity breeding contempt, Kuo states:


"Some ants and termites that have evolved the ability to detect Cordyceps-infected compadres; sentry soldiers guarding the Queen kill the infected insects and take their bodies far from the nest before they can threaten the colony."

Now for a specialist in action we have Torrubiella arachnophila.  The species name arachnophila comes from arachno, "spider," and phílos, “dear, beloved."  I suspect this is a case of unrequited "love," more likely an abusive relationship, as the fungus gets all the affection.   According to Mushroom Observer its "deprecated synonym" is Gibellula leiopus (Vuill. ex Maubl.) Mains, a debate we will leave to the taxonomists.
A final fungus that Mark photographed is "Beauveria bassiana," a species found around the world growing in the soil and parasitizing insects.  It is being used as a biological insecticide.  Studies showed it was highly effective in controlling bed bugs.  If you get the itch to try it you can find it at your nearest Amazon link.
Posted by Bob and Barb at 6:48 AM