Spring Ephemerals and Their Ants 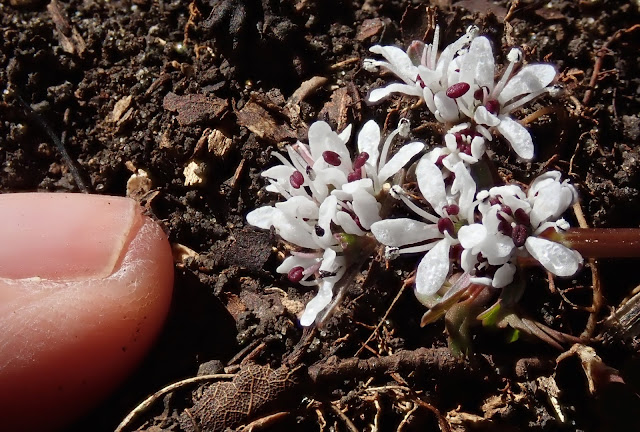 As usual, the tiny harbinger of spring, Erigenia bulbosa, was the first wildflower we saw this spring, this year at the end of February.  It's name reflects the fact that it's one of the first wildflowers to bloom in the Midwest.  It is also known as "salt and pepper" because of its white petals and dark reddish anthers.  Because it frequently grows on the forest floor, it adapts to the otherwise shady environment by blooming as early as mid February, before the trees leaf out and block the sunlight.

Many woodland flowers adopt this early blooming strategy.  The term spring ephemeral describes plants which quickly grow stems, leaves and flowers, then bloom, go to seed and the die back early, all before the start of summer.  The remainder of the year their surface features disappear, leaving roots and rhizomes underground for the rest of the year.  These plants tend to be found in forested areas.

The following spring ephemerals are commonly found in our Southern Ozarks:
Some of our spring ephemerals starred above (*) have conned ants into planting their seeds.  Each seed is capped with a little high energy packet of lipid and protein called an elaiosome.  Many species of ants will seek out the seed and haul it off to their underground nest, a process called myrmecochory.  After munching on their treat the seed ends up in their garbage, loosely packed in moist ant waste in what could be called plant heaven.

Elaiosomes occur on the seeds of over at least 11,000 species of plants worldwide.  It is estimated that this relationship has evolved separately over 100 times in 55 families of flowering plants over millions of years. One question from a WOLF student remained - "Will all ants carry seeds like this?"  I received this answer below from Eva Colberg at UMSL.

"It's a good question—there definitely is variation in who is attracted to the elaiosomes, as well as in who can actually carry and disperse the seeds. But the variation is more fine-tuned than even sub-family—genus and species are much better predictors of who takes the seeds and where they end up. It seems like most elaiosomes are chemically pretty similar to dead insects, so ants that are searching for insect carcasses will also be attracted to elaiosomes. Aphaenogaster rudis is the ant species I've seen (and other studies back this up) taking the seeds most often, although there's some evidence that they actually bring the seeds back up out of their nest once they've removed the elaiosomes."

This mutualism between ants and plants is just one dramatic example of the many relationships that go on under our radar or are unknown at present.  This is one more reason to preserve nature and share the wonders with others.
===
Some of the spring ephemerals are already out and preparing to bloom along the trail west of the Springfield Conservation Nature Center.  You can download a list of some of these and their photographs at this link.
==========
The subject of the relationship between ants and plants is huge!  More than you could ever swallow is in the Symbioses between Ants and Plants but it is a fascinating read.
Special thanks to Eva Colberg, PhD candidate at the University of Missouri-St. Louis.
Posted by Bob and Barb at 6:05 PM