The continued cicada chorus has been almost deafening, reminding me that I hadn't been able to memorize their Latin names.  On further reading, I came up with the common names of the most frequently heard cicada so I am expanding the previous posting.


Annual cicada, aka dog day cicada are discussed in an MDC article.
The cicada singing now are the Tibicen species .  These are familiar to most of us because of their stout green and black body.  Their transparent wings extend beyond their abdomen, looking like they could never get them off the ground.*
The males make a loud mating call to attract a female, varying between a rhythmic buzz and a rattle that is an insect version of "So, do you come here often?"  The sound emanates from specialized membrane organs on their abdomen.  The sound and time of day is unique to each species.  Play the sound files below and you will immediately recognize the sounds.
They lay their eggs at the base of trees and the emerging nymphs feed on the xylem of roots for 2-3 years before reaching adulthood.  Adults obtain sap from twigs and stems with their long beaks.  They molt several times, leaving their familiar dry paper-like husks on trees and buildings, a perfect mold of their last shape.  We used to see who could collect the most when I was a kid.  I know, my mother could never understand it either. 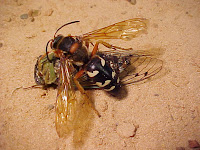 They have a large number of predators, the most impressive of which is the Eastern cicada killer.  This looks like a yellow jacket on steroids and you may see one emerging from its small hole in the ground to hunt its prey.  After paralyzing a cicada with its stinger, (see video) it laboriously hauls it back to the hole and lays eggs on the body.  Much like parasitic wasp eggs on a caterpillar, the larva feed on the paralyzed cicada, careful not to kill it until they are ready. The cicada killer won't attack us but may use its stinger for defense.  At 2 inches long, I don't think you will be tempted to pick one up anyway.**
Addendum:
An interesting time-lapse video on the cyclic 17 year cicada life cycle is at youtube.com.***
Tim Smith of MDC has posted Cicadas and Their Killers  on the MDC Fresh Afield blog
* Picture from Bugguide.net

**Picture from Texas A&M.
*** Sent by Hiltrud "Sam" Webber of Friends of the Garden.
Most information obtained from the MDC Poster, Singing Insects of Missouri.
Posted by Bob and Barb at 8:00 AM