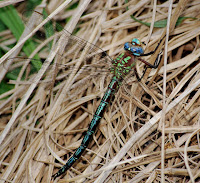 Today it is time to learn about the dragonfly that is the emblem of the Missouri Master Naturalists.  Cyrano Darner - Nasiaeschna pentacantha is also known as the Harlequin Darner.  They tend to fly slow patrols over lazy streams and ponds in late morning, chasing off other dragonflies.  Their peak flying time is June and July when they may be found feeding along woodland edges and streams.
Like damselflies, dragonflies larvae live in water.  While damselflies are usually close to water, dragonflies are stronger and may be found farther from water.   Adults and larvae are predatory, with the adults feeding on small flying insects which they catch on the fly.  They are referred to by the endearing term "mosquito hawk."

Dragonflies have narrow bodies, thicker that the needle-like bodies of damselflies, making them threatening in appearance  but they are harmless to humans.  Their membranous wings which are frequently clear, are held out horizontal to their bodies at rest.

Missouri Conservationist 2000 had this information on how to catch a dragonfly by hand.


"Approach them with one hand making erratic circles in front of the insect. A few failures will indicate how close you can get.  Slowly move the other hand in from the rear and pick the dragonfly up by its tail. Then switch your hold to its thorax. When calmed down, they will accept and eat offered insects, such as mosquitoes." Editor's note:  There were no instructions on how to hold the mosquito you are feeding it.

Identification of these creatures is aided by the program at Discoverlife.org.  By choosing wing patterns, tail shape, eye color, etc, you may be able to narrow your search.
Wikipedia has a lot of general information on dragonflies.
Henderson State in Arkansas has a great website with photographs of the Odonates (Damselflies and Dragonflies) of Arkansas
Thanks to Lee Ruth for the picture of our Master Naturalist symbol.
Posted by Bob and Barb at 8:00 AM