Driving down the Mail Trace Road at Bull Mills you are likely to see a small armadillo run in front of you every few hundred feet.  This one was busy browsing through the leaf litter for insects.  When I approached, it scampered over to a hole, disappeared, and then became curious and emerged for a picture.

Our little critters look like clones, and indeed they are.  Armadillo females will have one fertilized egg which then divides twice to produce four genetically identical embryos.  These grow into identical quadruplets, cute, slightly fuzzy and only lacking their own reality TV show.

It is time that we show some respect for our newest Missouri mammal.  They weren't here in any numbers back when the Wildlife Code of Missouri was created but had they been, they would likely have been included among the protected species.  They began moving north from South and Central America with the receding glaciers 10,000 years ago, first to Mexico, then to Texas and Oklahoma.  In recent years there are growing numbers in Missouri, now extending up above Missouri river.* 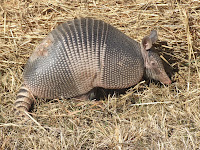 How did the Nine-banded_armadillo manage to get across our rivers?  They either walked or swam.  They can inflate their intestine and bob along the surface of the water or sink to the bottom and walk across!  They are able to hold their breath for up to six minutes, a handy adaptation if you spend long periods of time with your nose pressed underground searching for grubs.

They are generally harmless aside from occasional damage to plant roots.  Burrowing their snouts into the soil and leaves, they dig up insects, worms and grubs, eating an occasional small reptile or amphibian.  Their sense of smell allows them to find prey as deep as 8 inches down in the soil.  They are also talented excavators, digging holes for shelter which later provide a home for skunks, burrowing owls and snakes.

At the turn of the century there was a fad of armadillo sewing baskets.  They were created by cleaning out the shell and attaching the mouth to the tail, creating a handle.  Line the shell with silk and you were done.  I understand you can still buy these in Mexican gift shops, now painted all different colors.

I asked if they should be included in the Wildlife Code of Missouri. (See answer below**)  Even in the wild, there is something about them that makes people want to shoot them.  Certainly this is reasonable if they are destroying your garden or lawn, but out in nature we should be learning to live with them.  They are our newest native species and arrived under their own power rather than having been imported by humans.

In Texas, they hold armadillo races on 40 foot tracks.  Maybe that is the answer - create an armadillo race track around Branson.  You could create a tourist attraction and wouldn't have the erosion and noise pollution problems of the NASCAR track.

*"Armadillos are becoming more common north of the Missouri River and have been sighted in Iowa as well. They seem to have found ways to survive the cold winters at higher latitudes, although there have been documented winter die-offs during times when snow or ice remains on the ground for extended periods."

** "It is not necessary to add any text to the Missouri Wildlife Code regarding armadillos to afford them protection. There is currently no open season on armadillos and they may not be legally killed except by landowners or their agents when causing property damage. People shooting them indiscriminately in the wild are already in violation of the Wildlife Code and are subject to citation by a conservation agent. If you are aware of such activity, please call your local conservation agent to report the offense."
More on armadillo from Texas at this Texas Tech site.