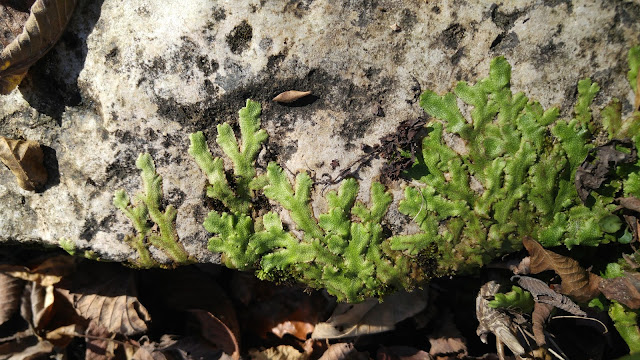 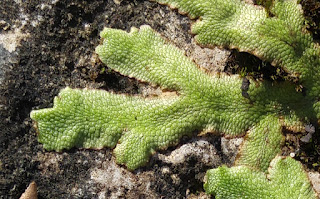 Green things that grow on rocks usually raise the question "Is that moss?"  At that point we all look at each other and shrug.  Gala sent me these pictures from a late October trip described below.  A few days later Chris Barnhart sent me photographs of a liverwort and I decided to dive into the subject of which I know nothing.  First from Gala:


"Oct 27- Allan, Jennifer and I took a field trip to Peck Ranch in hopes of viewing elk. The day was beautiful and a warm 80°, perhaps too warm for critters to be out and about at mid-day ...no elk to be found. Regardless of the lack of elk sightings, we had a lovely day and decided to stop at a low water bridge and hike the stream bed. It was a losing stream with several remnant pools and a few sections of flowing water here and there. Among the fall leaves, we noticed the vibrant green of some interesting plants clinging to large rocks, we stopped for closer inspection.

The plant looked a little "fern-like" but was close-growing on the rocks, not upright or loose. I pulled at the top of a "leaf" and discovered tiny "roots" attaching the plant to the rock itself. If you zoom in, it looks like interlocking scales or plates.  We took some photos for later identification, that's where Bob comes in...!"

I sent the photographs to Nels Holmberg for identification.  He responded that "This is Conocephalum salebrosum (formally Conocephalum conicum), the Great Scented Liverwort.  It is common along streams. And it does have a robust aroma."  Most of the information such as this detailed site is under the C. conicum name.

It is also called the Common Mushroom-headed Liverwort, or Snakeskin Liverwort.  It gets its snakeskin name from the tiny hexagonal scale-like surface.  C salebrosum is the largest of the thalloid liverworts.  In the Pacific Northwest it is the host plant for the Epimartyria pardella moth.  The Conocephalum genus has two known species and a worldwide distribution.
A few days later Chris Barnhart sent me pictures of a liverwort outside his office.  There was a dramatic difference before and after a rain.  Nels Holmberg tentatively identified it as Asterella tenella, a thaloid liverwort which usually spreads out one plant deep.  Since this was in a thick pad he sent it on to the Missouri Botanical Garden where the ID was confirmed.

When viewed close up, you can see the purple scales growing on the tips of the thalli.  This description, "Plants green with purplish undulate margins and purplish underside; branching dichotomous, rarely with intercalary branches" only gets more dense as it goes on.  This is a reminder that understanding bryophytes requires a whole new language.

Even the the question "Is that moss?" can be complex.  The overall physical similarity of some mosses and leafy liverworts means that confirmation of the identification of some groups can be performed with certainty only with the aid of microscopy or an experienced bryologist.  Help is on the way when Nels comes to our March meeting.  Until then I will probably dabble around the edges rather than plunge deeply into the field of bryophytes.

An Introduction to Bryophytes
Posted by Bob and Barb at 5:48 PM