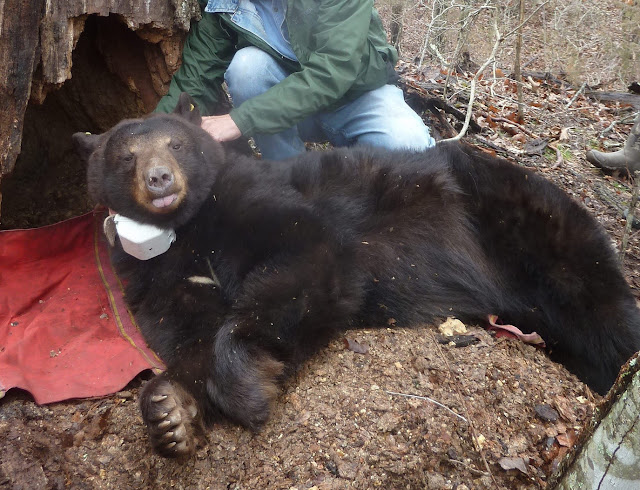 This is the time of year when the MDC bear biologists are checking collared female bears in their dens.  This is an opportunity to count and study any newborn bears and the health of the adult.  I had the opportunity to tag along with Jeff Beringer and his crew to locate a bear den last winter.  We were in the northern portion of the known bear range in Missouri.

They knew the approximate GPS location and used a hand held antennae to localize it in the woods.  This bear was nestled in the base of a hollow tree, but sadly did not have any cubs.  Jeff crept up to estimate the size and then measure the dose of sedative.  He sedated the bear using a jab stick, a 5 foot long aluminum tube with a spring-loaded hypodermic needle on the end.  After waiting for the sedative to take hold, there came a "moment of truth" when he had to creep up and test the bear. 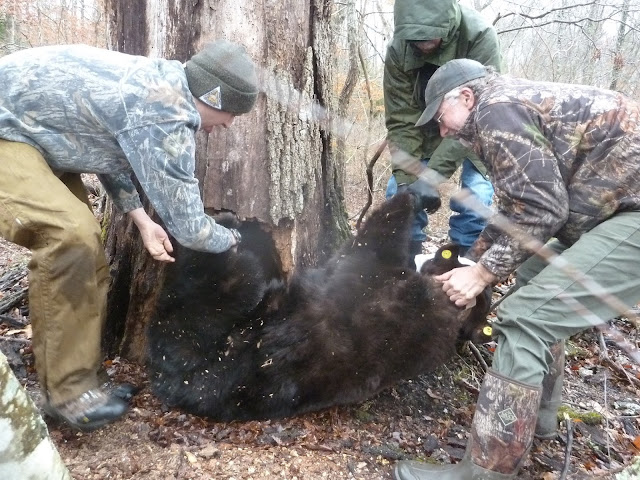 Then they pulled the bear out and started taking detailed measurements of everything including the temperature and dimensions of the den.  The bear was weighed by moving it onto a sling with a scale attached and lifting it up with a pole.  Over 20 measurements of the bear were recorded on the sheets you can see in this folder.  Fine details included a dental exam and even measuring the size of the nipples.  Body fat, hydration and muscle mass were measured by an instrument with alligator clips attached to the bear's lip and anus, (which I considered another way of testing the level of sedation.) 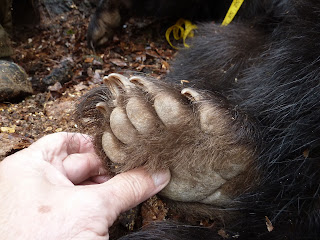 You can see the tracks of all radio collared bears that have been recorded at this MDC link.  The latest locations aren't posted for the safety and privacy of our bear neighbors.  You can see the locations of this bear (1519) by entering the number in the "bear selector" box on the left.  Turning on "Paths" and "Markers" will show where she traveled on individual days.

More photos and detailed narrative of this bear den check are on Flickr at this link.
Posted by Bob and Barb at 3:30 AM