Gala Solari shared these pictures of a fern that was growing straight up a tree trunk. I sent the pictures to Justin Thomas (Institute of Botanical Training) who sent back this answer.

"That is Resurrection Fern (Pleopeltis michauxiana). It’s a wonderful fern that shrivels upon drying only to rapidly bring back to life with rain. It is considered a species of high conservation value (C=8), is restricted to the southern and southeastern portions of Missouri and is one of our few epiphytes in the state. In the deep south, it is famous for lining the limbs of stately Live Oaks." - Justin

Epiphytes, sometimes called air plants, don't have roots in the soil.  As defined by Wikipedia, they "grow harmlessly upon another plant (such as a tree) and derives its moisture and nutrients from the air, rain, and sometimes from debris accumulating around it." 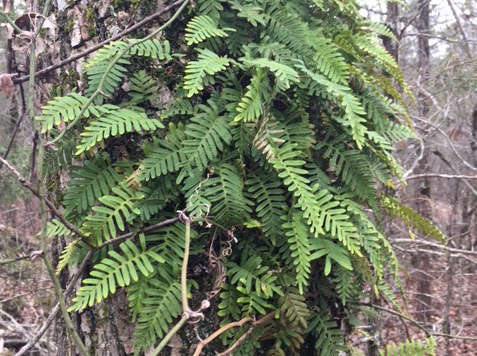 The "Resurrection" label comes from its revival with just a little water after weeks or months of desiccation, turning grey-brown and appearing dead.  Over 24 hours it returns to a vivid green color.  It has been estimated that it can last 100 years in this state, waiting for water to revive it.
Posted by Bob and Barb at 7:54 AM