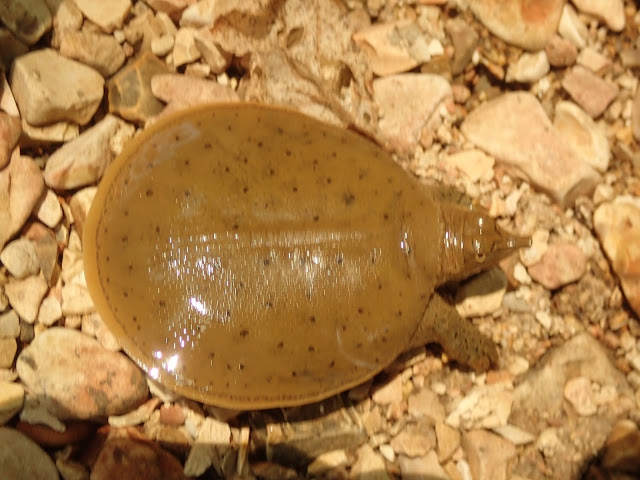 My third grade colleague Bruno grabbed this little 2" long turtle from a still segment of Bull Creek.  Its "shell" was smooth and almost flexible like leather.  I initially thought it was a midland smooth softshell, Apalone mutica mutica, based on illustrations in Missouri Turtles.  I sent it on to Brian Edmond who thinks it is a cousin, the eastern spiny softshell, Apalone spinifera. 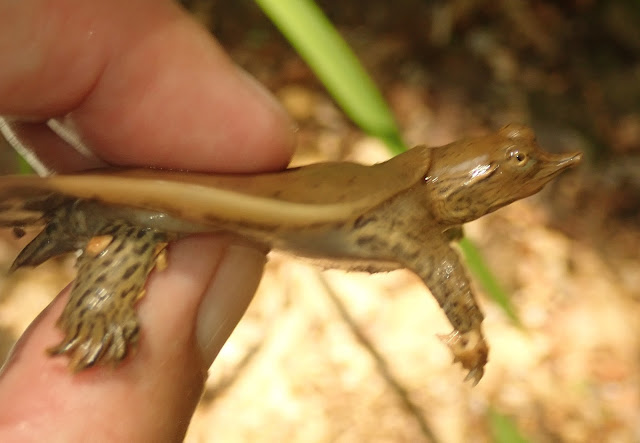 This is one thin turtle.  This is probably a benefit when laying on the bottom, waiting for a tasty aquatic insect or crayfish to pass by.  Their young are susceptible to predators such as raccoons and herons while the adults only have to worry about humans looking for a source of turtle soup.*  They are said to have a painful bite.

A. spinifera is identified by small bumps on the edges of its carapace, seen below just behind the head.  The placement of the spines can help define the multiple subspecies, a fine detail only important to taxonomists and presumably to the turtles.  "What lovely tubercles you have my dear.  Care to go for a swim?"  With luck it is the beginning of a brief affair.

Mating is almost a Victorian affair.  It occurs when they are 6-8 years old, no big rush here.  In the spring the male swims up to the female and nudges her head.  If she turns up her nose at him it doesn't matter as his nose is turned up as well.  If she accepts, he swims above and fertilizes without grabbing or holding on.  Several months later she will dig a cavity in a gravel bar and cover up her 8-30 eggs and from then on they are on their own.  They will hatch in September or even the following spring.

A. spinifera are said to mate in deep water, but without any deep pools along our stretch they must have to take their chances in the shallows.  There is no hurry as a large female (up to 19") may live for 50 years, and they are safe from us except for an occasional hungry human.
======
* Limits and regulations of soft shelled turtles are at this MDC site.  The limit on our section of Bull Creek is zero!

Animaldiversity.org has more details on the species.