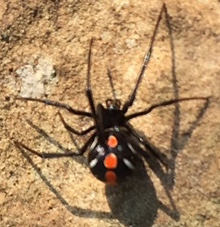 Gala sent me this picture of a black spider resembling a black widow but with red on its back.  She wisely didn't pick it up to see if there was an hour glass on its tummy.  We had written about black widows in several blogs and all the widows I have seen had pure black backs so I doubted this was a black widow.  It turns out I was wrong, not a surprise to my wife, Barb.

This is is a northern black widow, Latrodectus variolus, a different species from our southern variety, Latrodectus mactans. Here is what Bugguide says about it:


"For the northern black widow, the hourglass is distinct, but is broken(1) (whereas the southern black widow's hourglass is complete) and typically there is a row of red spots down the middle of the back and possibly some diagonal whitish bands on each side; the bands are typically observed on the younger, more juvenile widows."


A few years ago we blogged about how male black widows danced to avoid being eaten. This included the egg sacs that we raised in our house at the creek. I say "we" as Barb put up with it with a lesser degree of enthusiasm. Having raised them, I felt a degree of a paternal relationship and was conflicted about what to do with them. They handled part of the problem as their numbers declined daily due to cannibalism of their siblings. In nature, if all the spiderlings are the same size, cannibalism is less common.*

Eventually I was out voted in releasing them and they stayed sealed up for a year to ensure they were neutralized. I felt better knowing that a female will have 9 to 15 eggs sacs with 100-900 eggs apiece over her lifetime so she probably didn't miss these.

* How black widow mothers control their children’s cannibalism
Posted by Bob and Barb at 3:00 AM