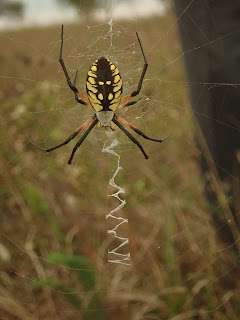 A quick field trip to Linden's Prairie with Jay Barber,  Dr. Gina Wood of MSU, and a group of teachers-to-be yielded a cool pair of Argiope spiders.  One of the students spotted this black and yellow garden spider, Argiope aurantia, the web decorated by its typical zigzag stabilimentum whose purpose is still debated.

This isn't the only unique thing about A. aurantia.  The male literally dies of a heart attack after inserting his second sperm laden palp into the female.  The whole story is too gruesome for this blog (but you can read it here). 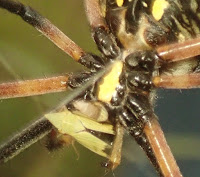 On close inspection one student noted that it was still holding the remains of an insect in its jaws as it hung upside down.  Under magnification I think it is the remains of a former grasshopper.  You can make out the head and eyes, the posterior pointing V of the pronotum and the remains of the front leathery wings (tegmentum).

As we were getting back on the bus, another student found this beautiful Argiope trifasciata, the common banded garden spider.  Its worldwide presence is thought to be due to accidental human introduction, to  Central & South America, Australia, the Mediterranean region, Africa, Sri Lanka, the South Pacific Islands, and China. 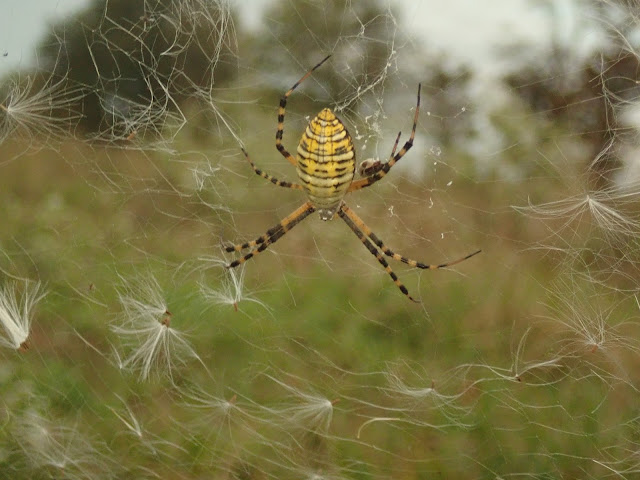 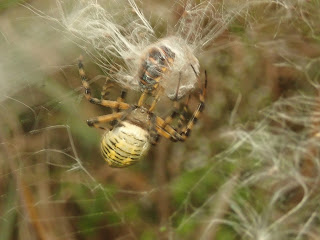 Our specimen was hanging from a web covered with feathery seed heads blown by the prairie winds.  As a parting gift, one student tossed a small curled up millipede into the web and the spider rapidly attacked.  It started spinning it, wrapping it tightly into a silken ball.  I tried to capture it on this video.  The first half is somewhat out of focus but you will get the idea.  When last seen, the millipede was tightly wrapped for a future dinner.
=======
Discover Nature Schools is a curriculum created by the Missouri Department of Conservation to give students "hands-on learning, teaches problem-solving, and provides authentic and local contexts for learning."  DNS prepares teachers to teach students from pre-K through high school about Missouri’s native plants, animals, and habitats and connects them with nature.
Posted by Bob and Barb at 6:56 PM