Exploring the glade at Henning CA with the Master Naturalist class, we were looking under rocks and came across several snail shells.  This was on a barren limestone slab.  It is south facing, exposed to burning sun in summer and drying wind in any season, a hard place to make a living. 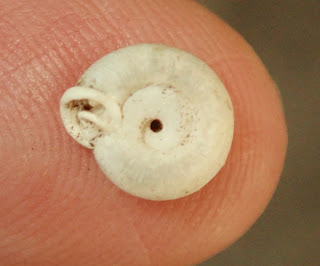 I sent these to Dr. Christ Barnhart and got the species identified from left to right as Polygyra (Daedochilus) dorfeuilliana and Rabdotus dealbatus.  These are both air-breathing land snails, meaning that they evolved from their oceanic ancestors, losing their ancestral gills and developing a "lung" inside their mantle.  Most land snails are herbivorous, eating leaves and stems of plants as well as fungi and algae. 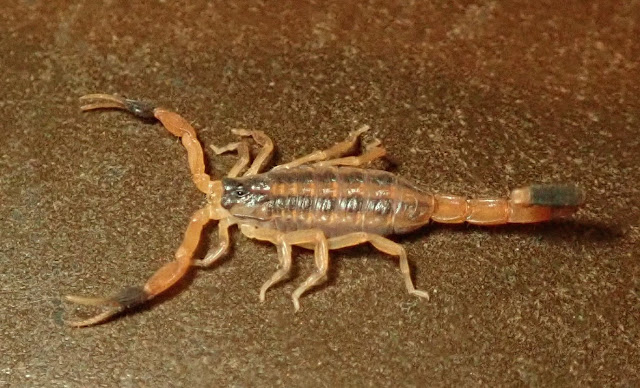 Turning more rocks we found a small scorpion.  It measured 10mm (2/5 inch) and tried to look dangerous by raising up its "tail."  They have large pedipalps out in front with pincers for grasping their food like their crayfish cousins.  For some strange reason, we always seem to focus on the rather small terminal segment of the tail, possibly because of its stinger.  With the exception of several southwest desert species, the sting in mildly painful, described as "... an immediate intense, localized, burning sensation with little redness or swelling; symptoms usually subside after about 30 minutes."  I guess that "mild" is in the finger of the beholder.

Small scorpions like this one are predators, eating mostly soft-bodied insects and other arachnids, including other scorpions.  Their common mating ritual is for the male to grasp the female's pincers.  This is a good strategy as like spiders, the female will occasionally show her gratitude for fertilizing her eggs by having the male for dessert. 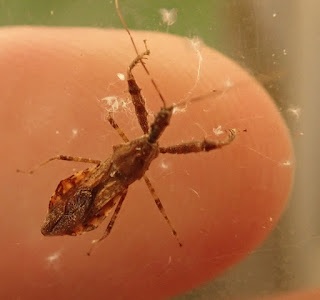 I wanted to get a photograph to show its relative size and settled on the time honored method of posing it on my finger tip.  It took multiple trips to the refrigerator to get it to hold still.  Photographic hint:  I had it in a plastic magnifier box.  I may be old but am not that stupid!

More on scorpions is on this IPM Fact Sheet.
Posted by Bob and Barb at 10:34 AM