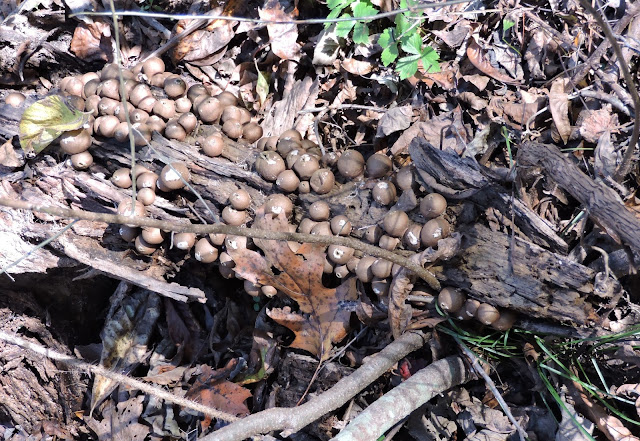 If you have never punched a puffball, you are in for a treat.  We were hiking along Peter's Branch of Swan Creek and came across two long dead logs covered with little fingertip-sized puffball fungi.  After taking a few pictures we got lost in the joy of poking them and watching the cloud of spores.

This was an incredible collection of a common mushroom, Lycoperdon pyriforme,  although I didn't recall the name at the time.  (Also, don't ask me the name next year, I am not Mark Bower or Michael Kuo.)  Speaking of Kuo, here is what he says about them in Mushroomexpert.com.


"Morganella (Lycoperdon) pyriformis is one of only a few puffballs that grow on wood, which makes it fairly easy to identify. Other distinguishing features include the fact that it is only finely spiny, with spines that usually wear off; and the long white mycelial strings attached to its stem, which is often pinched off at the base."

Mark explained to me that the current name is Lycoperdon.   Morganella is an older “deprecated synonym” i.e., it can be used but is discouraged.  In addition to being scientifically correct, I like this name Lycoperdon better. It translates from the Latin as “lyco” (wolf)and “perdon” (to break wind.  What is not to love about humble mushrooms covering a log whose name is "Wolf fart."

After years spent spreading their tiny mycelial threads through the dead log extracting nutrients, a rain prompts the fungi to reproduce.  I think of the mushrooms as the flowers of the fungus, springing up to broadcast their offspring into the world.  While many fungi do this by dropping their spores from gills or pores underneath a "toadstool" cap, puffballs store their spores in the ball, prepare a little escape hatch and wait for us or some other creature or even a rainstorm to push their spores out in a little brown cloud. 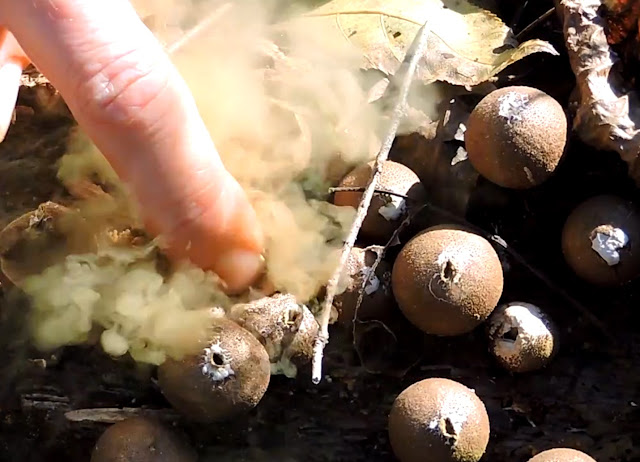 Where else in nature can you wantonly punch at a living thing and do it a favor, spreading its spore into the wind?   Pressure of a finger or even a raindrop pushes the spores out the little volcano-like opening at the top, increasing their dispersal.  The skin of this mushroom is surprisingly tough and and the mushrooms can survive the winter on occasion.  Keep your eyes on the forest floor and you too may be able to have fun as we did in this video.

Mark Bower will soon be featured on the blog discussing other puffballs including the spiky beauty below .