Wasps You Can Dig 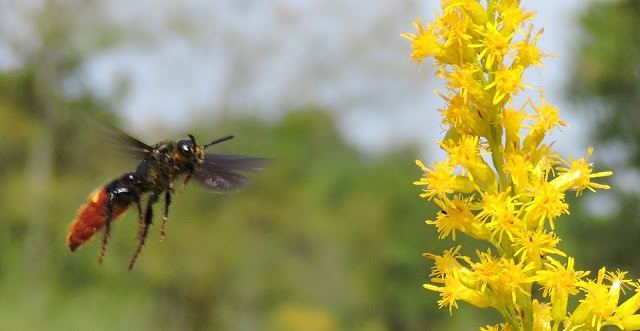 We are having lots of reports of this Blue-winged Wasp, Scolia dubia, on Goldenrod. This plant is a favorite of this Digger Wasp which gets most of its energy from nectar. Most of the Internet photographs show them on White Clover and Goldenrod or other yellow blossoms. This is a gorgeous wasp with its colorful abdomen and metallic blue wings. 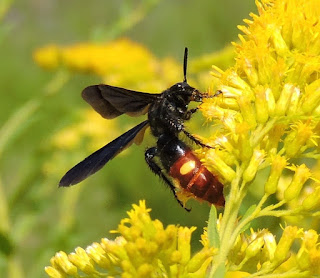 The male S. dubia has a more slender body and longer antennae but with nothing to compare it to, I wasn't able to make the distinction. The give away would be the tail end. Males have a distinctive three-pronged pseudostinger and can't harm you. Females have the ability to sting but rarely do unless held. The males will hover just above the ground in the morning, awaiting an innocent newborn female to mate with. By evening they give up and congregate in a "boys club" to roost with their buddies before trying again in the morning.


The real beauty of this digger wasp is what it digs. The female digs into the soil after grubs, especially of Cotinis, June Beetles. These are common in our front yard where they feed the moles that tunnel subsurface like a border drug cartel. Even better, they have developed an appetite for invasive Japanese beetle larva. They will sting the larva to paralyze it, then dig down farther and lay an egg on its prey. The wasp larva is an external parasite that will eat on the grub, then spin a cocoon and remain in a prepupal state (still a larva) until summer when it pupates and finally emerges late summer as an adult.* This probably accounts for why we see so many in Goldenrod season.*
See "Bug Eric" Eaton for details.