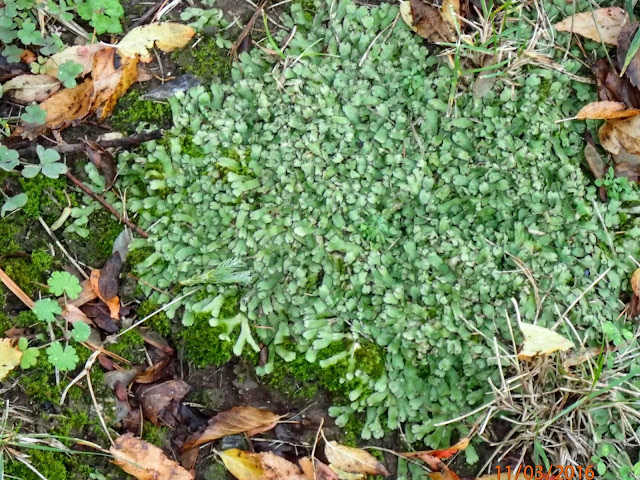 Back in November, Chris Barnhart send me pictures of a large patch of liverwort that he had been watching.  Initially it was a dull mass, seen below, but the morning after a rain it blossomed into the bright green you see above.  I sent it to Nels Holmberg who identified it as Asterella tenella, sending it on to John Atwood for confirmation.  They added that "I have never seen such a thick pad of this species. Usually it is spread out 1 plant deep."

My initial search for Asterella tenella brought up only limited listings with no details.  One titillating title caught my eye, Laboratory Induction of Sexuality in Asterella tenella, but as usual in scientific literature it was only describing the short days and low temperatures required for the induction of sex organs in this species.

A. tenella is a thaloid liverwort, which I am sure most of you recognized but was Greek to me (actually Latin, but never mind).  I did finally find this definition of the genus.


"Asterella is a liverwort, a type of simple, non-vascular plant, akin to mosses. Like mosses, liverworts are restricted to moist habitats or moist times of the year. ......Astrella is found widely around CSUCI, but only in well-shaded habitats (such as the shadiest parts of north facing slopes). It is active (green) only in the days or weeks immediately following rainfall. When dry and inactive, it is black and crusty" Cal. State U Channel Islands

Our Master Naturalist program in March is on the Bryophytes by Nels Holmberg.  They are the "lower half" of the plant kingdom, seedless non-vascular plants, made up of mosses, liverworts and hornworts.  The other "half" are all the flowering vascular plants we are familiar with.  For me it is easier to talk about what bryophytes aren't, comparing them against flowering, seed forming trees, forbs and grasses that are familiar in their lifestyle and reproduction.

One thing I can start to understand is that since they aren't "vascular," there are no vessels for fluid transport.  What would appear to my untrained eye as a "root" is called a protonema, branching filaments that spread out and form shoots and leaves.  With no vessels to carry water, "Water and mineral nutrients required for the moss to grow are absorbed, not by the rhizoids, but rather by the thin leaves of the plant as rain water washes through the moss cushion."*

At that point I begin drowning in a sea of terminology about asexual reproduction and structures.   I would suggest that you take a deep breath, relax and pick up a hand lens to look at the beautiful macroscopic structure above.  If you are one of our Master Naturalists, come to the next meeting with an open mind.  If not but still curious about nature, maybe you should consider looking into a Master Naturalist or like-minded organization near you.  Warning, it can be addictive!