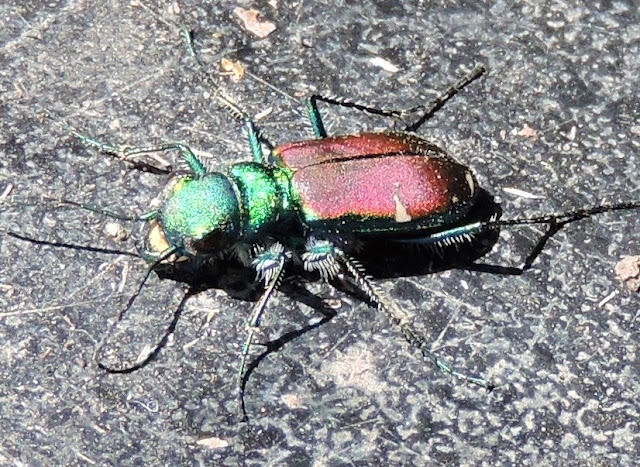 Barb spotted this bug on the floorboard of her Ranger and it held still just long enough for me to get the camera for a quick shot before flying away.  The iridescent green was typical of a tiger beetle, Cicindela sp.

Barb's beetle is a Splendid Tiger Beetle, Cicindela splendida.  While several tiger beetles have brick coloration on their elytra (hard wing covers), coloration can be variable.  The Splendid has small distinctive white bands on the middle edge and the apical lunula.  Males can be identified by the dense hairs around their front legs.

These little beetles average 11-14mm in length but make up for their size by their speed and large mandibles.  They can run up to 5 mph or 120 body lengths a second.  Usain Bolt would have to run 450 mph to achieve that ratio. This speed  blurs their vision so they frequently overrun their small invertebrate prey (or the lady they were pursuing) and have to stop to refocus before racing again.

Racing to find the female, a guy could be forgiven if it happens to be the wrong species.  Not to worry, slight anatomical variations save the day.  Bug Eric describes the pronotum (top of the thorax) of the female which has specific indentation for her species.  These "notches and dents" are a perfect fit only for the male of her species who will hang on to mate and then protect his sperm investment by clinging to her to prevent competition.

Small and hard to find unless they are running, they are most active in the fall and then emerge in the spring to feed, mate, lay eggs and then hide again.They tend to be in clay and gravel areas with sparse vegetation frequently on gravel roads like where Barb found it.  It stalks, races to the prey and pounces just like..... a near-sighted tiger!

The West Virginia DNR has a comprehensive publication on tiger beetles.
Posted by Bob and Barb at 3:00 AM