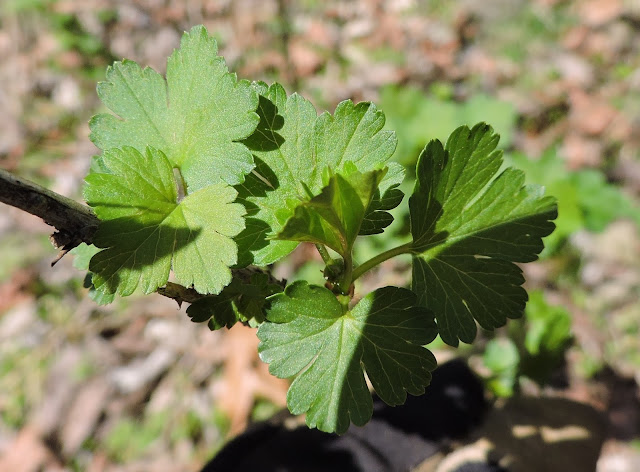 There is not much new to see while hiking in the valley and what there is shows little color.  I saw a few small stems with green leaves, a rarity this time of year and expected to find some invasive multiflora rose (MF) or Japanese Honeysuckle that had escaped Barb's herbicide and clippers but this was different.  The thorns were thin and straight rather than recurved like the prickles* that MF produces that dig in deeper into your clothes and flesh when you pull away from them.  A closer look at the leaves showed a distinct difference with rounded lobes rather that the toothed margins of our MF enemy.

Barb identified the pictures as Missouri Gooseberry, Ribes missouriense.   The most valuable source for plants in our area is illinoiswildflowers which paid off again.  Their photographs are detailed as is their description.  Unlike the hated MF, this is a great plant with lots of benefits for nature.

The nectar and pollen attracts bees, flies,  butterflies and even hummingbird moths.  It is a host plant for the gray comma butterfly. The fruit is eaten by birds as well as fox, skunk, squirrel and raccoons.


The Illinois Wildflower insect table is particularly valuable in finding the gooseberry's value in nature as measured by what eats it.  There are diverse species listed including my favorite the sumac flea beetle.  "Value" is a rather artificial concept we bipeds define, trying to quantify the complex interrelation of plants and animals.

"We" arrived on the continent 9,000+ years ago, making some minor modifications.  Then the second wave of "us" from Europe in the 1500s brought the Columbian Exchange, upsetting a balance of nature that was doing quite well without our interference.  While many species were brought for food or comfort, others like multiflora rose were an attempt to add beauty.

Multiflora rose was one of those beautifying mistakes.  Brought here from Asia in 1866 as root stock for other roses, it was promoted in the 1930s as living fence and for erosion control, another example of what seemed like a good idea at the time.  It later was planted in highway median strips as a crash barrier, a role that continues on our ATV trails.  Our bad!

*  We discussed thorns vs. prickles in a 2013 blog and nothing has changed since then.  The short answer is that armature describes a sharp pointed appendage and includes thorns, spines and prickles.
Whats in a name?  (3-17-2017)
Our friend Amy raised the question of why the "goose" in gooseberry.  It appears that no one knows but there are lots of speculation about the corruption of foreign words in this wide spread fruit, including several "saucy" possibilities mentioned in Wikipedia.

References
Kentucky University publication describes the thorns, spines and prickles.
llinoiswildflowers has good information on gooseberry as well as virtually any plant in Missouri.
Posted by Bob and Barb at 6:20 PM