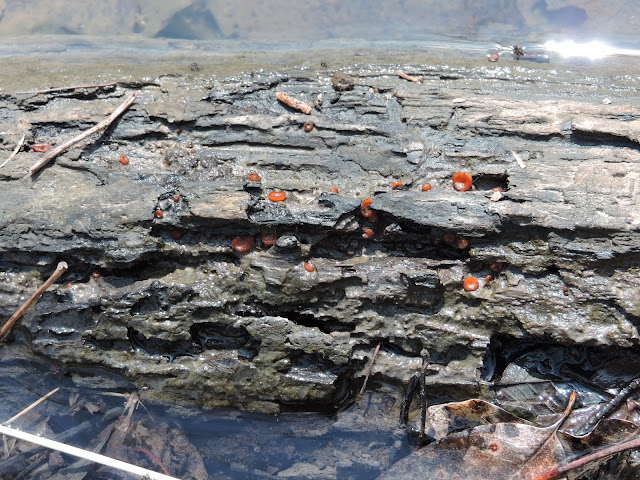 As I was out looking at a small pond for Spotted Salamander eggs, I noticed a water soaked log floating in the shallow water.  In pushing it away I could see several tiny red spots on the bark.  After dragging it back to shore I harvested several pieces of bark for the photographs below. 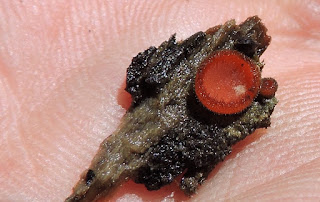 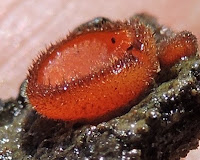 Mark Bower identified it for me as Eyelash Cups fungus or “Molly Eye Winkers” (Scutellinia scutellata).  Eyelash cup is the perfect definition for this fungus, especially a side view under magnification.  They vary in size from minute to 1.5 cm and mine measured 3mm.  These saprophytic fungi can grow on the ground or on wood.

The "Winkers" are found on every continent as well as the Solomon Islands and Iceland!  Recalling that Iceland is a volcanic island, an infant in geological terms, that arose out of the sea "just" 24 million years ago.  Winkers probably arrived by air-blown spores.

Although their orange color comes from carotenoids that are found naturally in plants such as carrots, they are listed as "inedible."  This is based on size alone although they are described as "lacking taste or smell," confirming my suspicion that among obsessive mycologists, no fungus goes untasted.  Mushrooms are generally described as delicious, edible, non-edible, "make you sick" and deadly, generally preceded by some words like "Hey guys look, aren't these edible?" 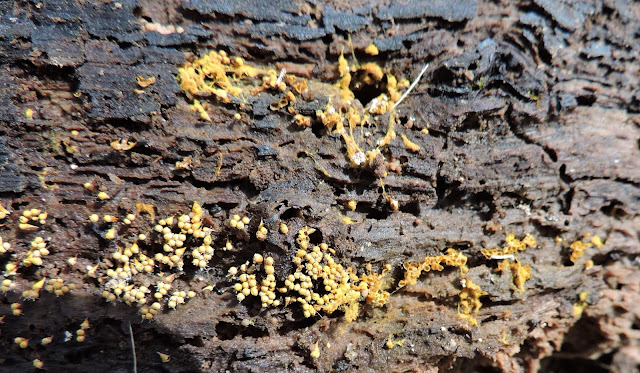 That got me to looking at other logs more closely.  Rolling a log over looking for salamanders, rotting bark fell away exposing these tiny 2 mm yellow spots.  They looked like tiny eggs but on 12x magnification, the bumps had their own bumps.  Again, this required input from Mark. 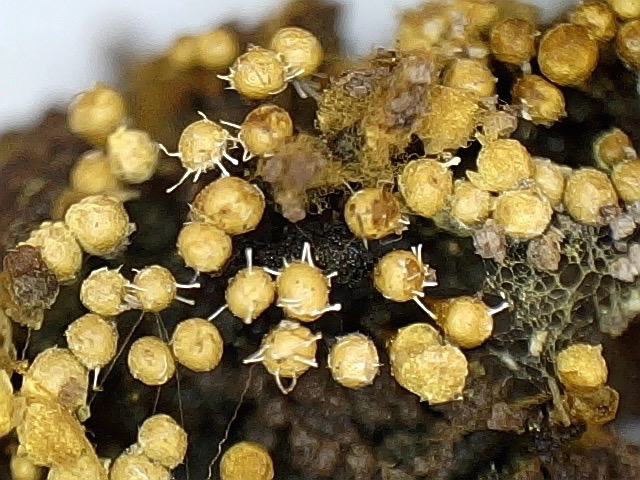 "The yellowish spherical things are definitely a Slime Mold from last fall. Most of the sporangia didn’t open before something happened (cold weather, dry conditions or other.) However, you can see some of the capillitium (which is that hairy glob) that was released from the sporangium that did open. As far as the species, it looks like some of them have individual stalks, which would suggest that this is one of the Hemitrichia species, possibly H. clavata. The white knobs appear to be an unknown white fungus that is decomposing the slime mold."