Our stream team last week found lots of caddisfly larvae cases including 26 on one rock alone.   These cases are made of tiny pieces of gravel, twigs and sand which the larvae start to glue together with silk shortly after birth.  Cases I had previously found were tubular but these were round, giving them the name snail case building caddisflies.  Dr. David Bowles of MSU identified them for me as Helicopsyche borealis, which trout fishermen call a Speckled Peter.


"The clumping you see in that photo, is a pupal aggregation behavior. They do that, apparently, so that when they emerge, the adults will be in closer proximity to one another. They secrete pheromones for attraction, so closeness is probably pretty important."

These little rock cases are made with silk excreted from their mouths.  As they grow, the larvae continue adding more rocks to the case which is open on both ends.  They draw water in through the posterior hole, across their gills and push it out the larger anterior opening.  They have a soft body but a harder sclerotized head which builds the case around the anterior end.  Their heads extend out to hold on to rocks not unlike a bagworm does on branches. 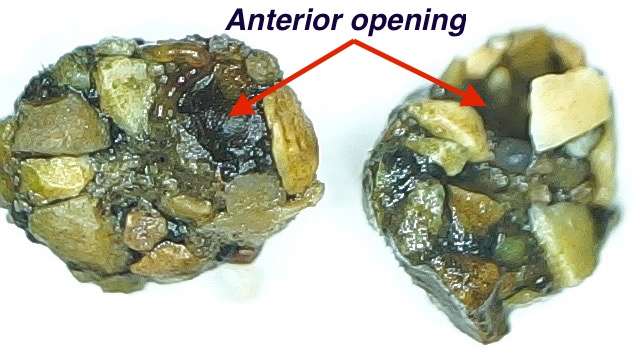 I was curious to see what these little guys/gals looked like but didn't want to break open a case which would harm them.  I took some of the 6 mm cases off the rock and carried them home in water.  Under the microscope the cases just sat there for several minutes and until I pushed them closer together.  Then the action started. 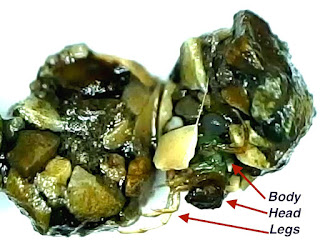 The larva on the right started reaching out until one leg touched the other case and it pulled it up tight.  The grip was strong as it must be to hold the case onto a rock in a current.  Each time I separated them, it would wait until I pushed them within 2-3 mm and then it would come out as seen in this video.  The other larva in the case on the left was facing upward and would occasionally move around the opening but couldn't apparently sense its neighbor.

The larvae feed primarily on diatoms, algae and detritus which they scrape off the rock surface.  They will continue to grow and build their cases until maturity.  The adults emerge, breed immediately, and fly low over or in the water to the delight of trout fishermen.


"Adult emergence throughout the season with a 5 to 6 month egg diapause. Both emergence and egg laying occur in the evening, the females will flop aimlessly on or near the water edge while extruding a mass of eggs (hangs off the tip of the abdomen), then later attaches the mass to a solid object.

H. borealis adults look different in flight from other Caddisflies. They fly with both wings in unison because the hindwing is attcahed to the forewing with a row of tiny hooks; normal Caddisflies beat their wings as two spread-out sets (LaFontaine, 1981)."   University of Alberta

We also found some caddisfly larvae without a case.  Free-living species don't build cases until they are ready to pupate.  Our specimens however were Cheumatopsyche sp. of the Hydropsychidae family.  These are net-spinning caddisflies, generally living in shelters they spin with silk that serve to sieve detritus and small invertebrates in the fast moving sections of a stream such as the riffle we were working.
Our specimen was likely crawling away after being displaced from its net on the right.  The net is still holding on to several pieces of gravel.  Displacement is a fact of life for the net spinners, forcing them to find another place in a riffle to set up housekeeping.  If the area is occupied, they can communicate their displeasure to the migrants by defensive stridulation.  To make this sound they run their femurs across ridges on the undersides of their heads.  Since they do this under water, I had a mental image of the entomologist in the stream with an ear on the rock.  They actually observe them while making audio-frequency recordings.
===
Thanks as always to Dr. David Bowles of Missouri State University for his patient guidance.
Posted by Bob and Barb at 3:00 AM