At the Watershed Festival at Valley Watermill Park, Laurie Duncan introduced me to this beauty that accompanied her back from the Stream Side Station.  It patiently crawled around on her water bottle while I found a bug box,* a puzzling behavior for a bug with wings.  Measuring around 9mm, I was only able to photograph it after cooling it off in the refrigerator.  (No "bug" was injured in preparing this study.)

Stuck in Springfield with no field guides, I sent the photo to Dr. David Bowles from MSU and he quickly answered my call for help.  "Its a March fly (family Bibionidae, probably Bibio)." 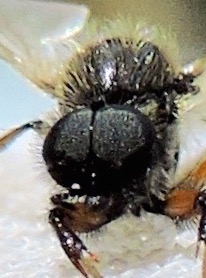 A few days later at the creek Barb mentioned tiny flying insects in swarms getting in her eyes as she chased the dastardly invasive garlic mustard.  A quick ATV trip across the field with a butterfly net held in front of my face and I had a dozen of the pests in the bottom of the net.  I tied it off and stuck the netting in the freezer door for five minutes.  Barb is a real angel.  When removed, one was sufficiently stunned for a full facial portrait.  (Some "bugs" were injured in preparing this study.)

Again these were March flies.  Bugguide.net includes the following description:
Bibionidae larvae are herbivores and scavengers while the adults can be important pollinators.  Some of the Bibio sp. that ours may be don't eat as adults, flying 3-7 days to mate.  They fly slowly, frequently drifting downward as they search for mates.  They can swarm in enormous numbers as they look for them.  Copulating pairs attach at the rear of the abdomen and remain like that as they fly, giving them a common name of double-headed fly.  The Plecia sp. have even earned the name Love Bug because of their dedication to copulation.

The Bug Lady from the Wisconsin Field Station has this entertaining blog with more details.
Posted by Bob and Barb at 8:28 AM