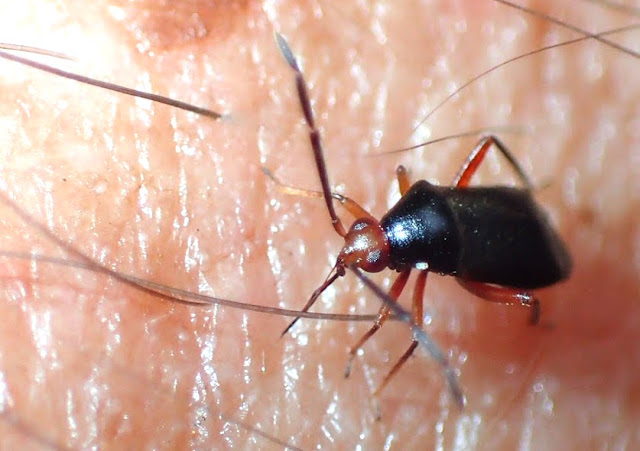 We were out looking for insects in the woods when this one found me.  I felt it before seeing it, an annoying pain, but as a bug nerd I held still as Chris got out his camera to photograph the attack.  Then it went into a bug box for identification.  It measured a whopping 7mm and after an hour in the refrigerator (love that tolerant wife) it went under the microscope. 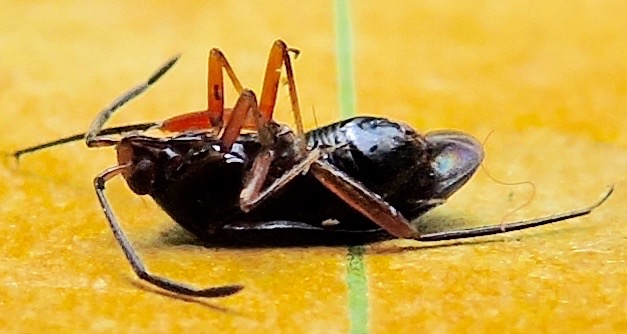 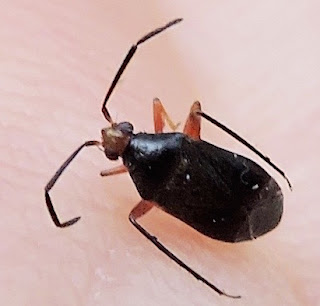 It fit some characteristics of Miridae, the family of plant bugs.  I am not a plant although around our house when it comes to helping with the laundry Barb might accuse me of acting like one.  Miridae is the largest family of true bugs with 1,930 species in 223 genera listed in North America.  I sent the photographs off to Bugguide and they came back with an ID of the Ceratocapsus sp. 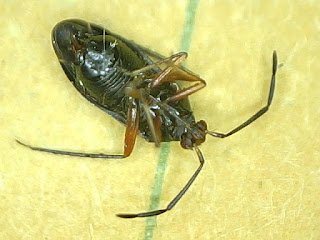 The Miridae family of bugs is primarily made up of species that feed  on plants and some are destructive pests. Some species however are predaceous on other insects and may have the ability to deliver a painful bite to humans. Adults are elongate oval, 4-14 mm long, and with two distinct cells on the wing membrane. They are active flyers.

Miridae may pierce human skin when it is either moist with perspiration or dry. A large number of species are known to bite and suck blood. While some of these are predators, Schaefer** reported in 2003 that some of the herbivorous species (plant eaters) would occasionally bite humans.  Wheeler* describes in greater depth the occasional bites by Mirids considered to be obligate herbivores (i.e. must eat plants)  that on rare occasion will bite us, somewhat like a vegan indulging in the guilty pleasure of a Big Mac.

The reasons for this behavior are unclear, and it is likely that they are seeking nourishment, minerals or moisture. The majority of records of Miridae biting are from North American species, as listed below.***  This Ceratocapsus genera is not recorded as a biter.  It is likely that many other species have taken a nip on a casual hiker and escaped under the entomological radar.