The Ants and the Toad

We spent the weekend hiking Stilwell Prairie at the Missouri Prairie Foundation Bioblitz.  It was warm but a stout breeze kept us cool, the plants waving, and butterflies blown around at warp speed.  There is no such thing as a bad bioblitz and this one was no exception.  Witness the ant and the toad.

Plunging into thick growth with John Miller (MDC) in search of amphibians and reptiles, we turned over boards planted weeks earlier as cover.  The one board above exposed a large colony of frantic ants, now running in all directions and trying to protect their white larvae.  After recording this video, I put several in a bug box as they nipped away at my hand, in a vain justifiable homicide attempt.

Back in the headquarters tent, myrmecologist Dr. James Trager identified these as Formica difficilis.  This is one of many prairie species that require our vanishing prairie habitat to survive.  Counting the unique prairie species is one way to measure the fantastic diversity of these ecological gems.  James had photographed F. difficilis recently on the prairie portion of Shaw Nature Reserve and he sent me to Bi-State Bugs to get his comments and photograph of the rarely seen tiny queen.


"Formica difficilis - An ecologically conservative grassland ant species that once was common in Missouri's prairies, now rare and spotty due to nearly total suitable habitat destruction. Note the small, coppery-gold queen; This is a member of the specialized Formica microgyna (Greek for small queen) species group." in Bi-State Bugs 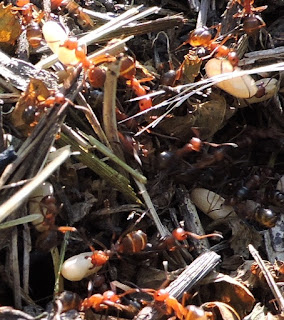 Our ants were below a herp board, actually one of several pieces of metal roofing laid out to encourage amphibians and snakes to take refuge.  These ants had found what seemed like a safe home and they adjusted the temperature for their larvae by moving them to different areas of the nest.  As seen in the video, this is the equivalent of Barb hauling around a 200# baby.  The ants were frantic until we lowered the board again, minus only a few members of the colony.


The ants were lucky that it was only a bunch of curious naturalists.  John Miller showed us one of their natural predators, the Eastern Narrow-mouthed Toad.  This ant specialist lives mostly under rocks logs and boards like ours.  It has an interesting adaptation which allows it to feast on an ant colony without damage from bites like those on my hands.  The toad has eyelids that close protecting them when it is feasting on a colony.

Consider this microcosm.  An ant species that needs prairies and high quality grasslands.  A toad that lives under structures around moist areas but can survive on drier and even glade-like environments to find ants.  And lumbering humans, lifting up boards to appreciate them or under other circumstances wipe out their habitat to raise corn, fescue, or even shopping malls.  And that is why we support the efforts of the Missouri Prairie Foundation to protect these ecological gems.

===
More finds from the Bioblitz are in this Flickr album.

Sorry if you missed this year's Missouri Prairie Foundation Bioblitz but there is always next year.  Look for this and other MPF events, including the Annual Dinner on August 5th on their homepage at Moprairie.org.
Posted by Bob and Barb at 3:00 AM