Life on an Elm Leaf 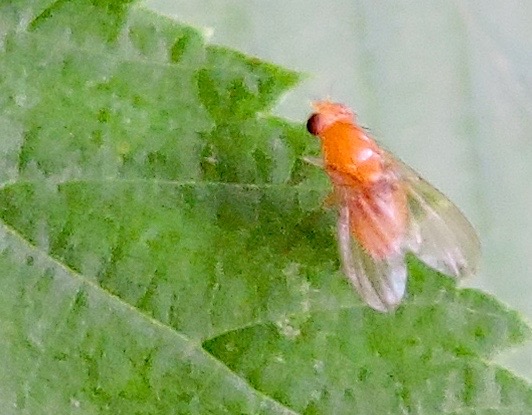 I love looking for diversity in a small space and the American elm leaf provided just that.  I first spotted this bright orange fly on the only remaining remnant of this chewed, curled and folded leaf.  It measured roughly 6mm and was patient enough for my camera. 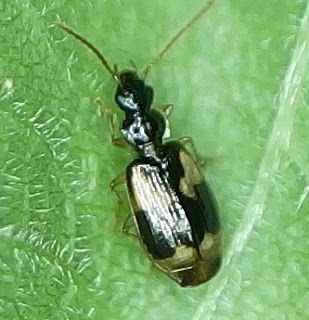 I was curious about what had caused the leaf damage.  Pealing back a folded edge, I exposed a tiny larva that patiently laid in its groove.  The clouds started to deliver a sprinkle so I broke off the leaf and took it home to photograph.  Putting it under the microscope, the first thing I saw was a tiny beetle.  It must have been as startled as I was as it remained frozen just long enough to get a photograph, then scurried across the dining table before falling into my bug box.  It was more cooperative after a few minutes in the refrigerator. 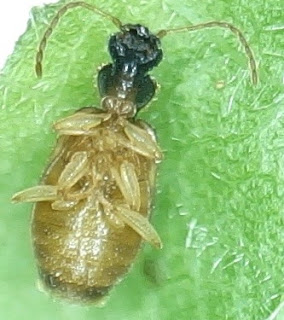 This 4mm specimen is a colorful ground beetle of the genus Lebia, now identified as Lebia lobulata as the one shown below.


The "ground" beetle name is misleading as they are frequently found on foliage like this elm, six feet above the ground.  They are typically seen in late spring, the first of two generations in the south.  The adults are predators and I may have saved the little larva above from an early end of life, or on the other hand, I may have starved a beetle. 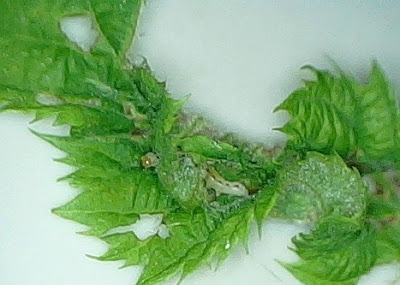 Back on the microscope stage, the larva had managed to crawl under another folded segment of the leaf.  I used a toothpick to lift this up and get a good view.  It didn't seem particularly grateful for my efforts, but did hold still for pictures.  No telling what this one would grow up to be. 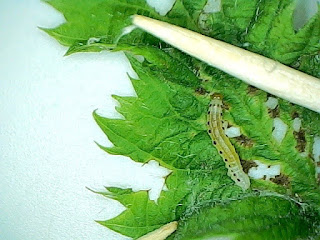 Meanwhile, back to the fly, the hunt was warming up.  It appeared to be a true fly of the Diptera family.  The best fit is the family Lauxaniidae which prefers shaded woodlands and forests.  They have bristles above the eyes that I can barely make out under strong magnification.  Note to self - next time take a net.

This may seem to be a lot of visible life on a single tattered leaf, but it is surprising how much there is out there in a small space if you take time to look into it.  Cynics might say that I have too much time on my hands and I ought to get a job.  I tried that for 35 years and besides, now I have a job, it just doesn't pay in cash.

=====
Another story of insects living together is found in Linda Bower's fascinating video, Creepy Mystery Egg: 16 Days on the Butt of a Baby Water Boatman. If the title doesn't get you the soundtrack will. Spoiler alert - the autopsy at the end is messy. See this Youtube link.
Posted by Bob and Barb at 3:00 AM