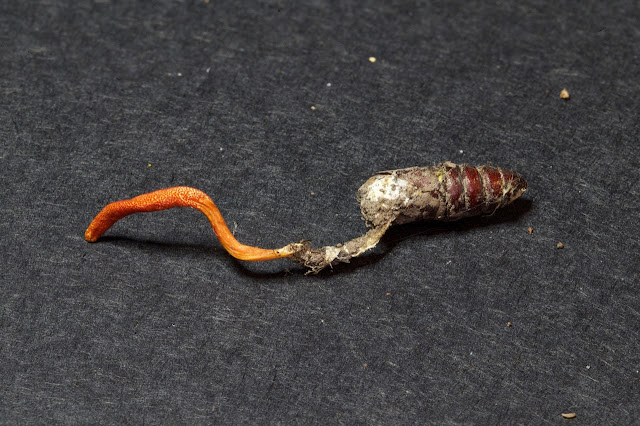 When Christmas approaches, the woods are cold, the leaves are gone and new findings in nature are fewer.  Digging back on stories I had forgotten, I came across a picture Mark Bower sent me in September that got lost in the start of school.  This is a moth cocoon that has been parasitized by a Cordyceps militaris fungus.  The pupa has been virtually replaced by the white fungal mycelium and  the fruiting body, aka mushroom, has emerged. 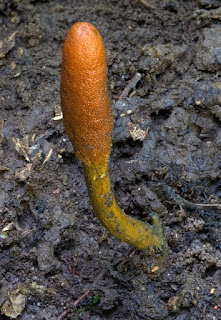 If you or I came across this in the wild, we would likely pick it off at ground level to look closely at it.  The trick is to know to dig into the ground and find the substrate.  C. militaris attacks the pupa of moths that are buried in the ground.  The mycelia infiltrate it, keeping it alive to feed it until it eventually consumes the innards, and then sends forth its fruiting body above ground in a burp.  By digging instead of picking, Mark was able to preserve the whole fungus.


Going back into my files of topics, I found the picture of another one above, that Mark sent me last year.  It too got lost in the files, but here is what he said about it.


"The first picture is how I found it on the forest floor. I dug it up and the cylindrical structure became apparent. This fungus feeds on the larva or pupa of butterflies and moths (and others?). It must not be too particular. The next photo (below) shows the insect structure cut longitudinally."

He goes on to explain that this fungus is an ascomycete. The spores are ejected from the pimply perithecia in the magnified photo on the right.

If this reminds you of a scene from Alien where John Hurt develops the mother of all cases of indigestion, remember that this fungus has been doing this thousands of years before movies thought of it.  While the message in the movie is 'what you eat could eat you', in the Orient this fungus is consumed as a medicine!  As explained in www.eco.nsc.ru:


"The use of the fungus C. sinensis, growing on caterpillars of ghost moths in the mountain regions of China, Tibet, and Nepal, as a medicine was reported in 1082. Tibetans call this fungus Yarsa-Khumbu, which means “summer herb — winter insect”; Chinese, Dong chong xia cao, i. e., “the herb that eats caterpillars”; and Nepalese call it Jivan booti — “the herb of life”.

Indeed, the fruiting bodies of C. sinensis contain unique substances — the polysaccharides that display immunomodulatory, antibacterial, and antiviral properties. This fungus is considered the most valuable remedy for asthma, hepatitis, vascular and renal diseases, liver cirrhosis, cancer, and many other serious diseases. A number of researchers have demonstrated that other fungal species belonging to the genus Cordyceps display analogous pharmaceutical properties."

There are some preliminary studies on the medicinal potential of Cordyceps which may yield future therapeutic agents, but meanwhile I would suggest that you "don't try this at home".