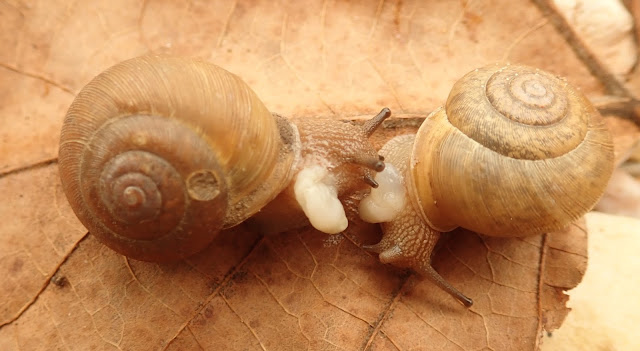 We encountered these snails clinging onto a sycamore leaf in the midst of mating last week.  Chris Barnhart identified them as  white-lip globe snails, Mesodon thyroidus, members of the Polygyridae family.  They are land snails, species that left the water and lost their gills long ago when they evolved into air breathers. They are equipped with lungs and are therefore called pulmonate.  In case you have forgotten some of your snail anatomy I've attached a reminder below.

When we first saw this pair there was a bright blue band connecting them, their intertwined copulatory organs filled with their blue blood.  By the time I had my camera out they had separated, leaving their pale white organs dangling, but Alan Cresslor caught a pair like ours in flagrante delicto in the photo below.  The whole subject of snail reproduction gets very complex and I won't get into their love darts which are not fodder for a family blog like ours.

Most land snails are hermaphrodites, equipped with both male and female organs.  Some species may reproduce without mating but other species like our M. thyroidus transfer their sperm to the vagina of another snail via the penis seen above. 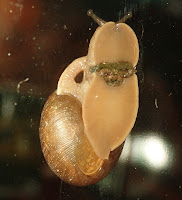 We kept these snails long enough to get them to the WOLF School.  I followed one attempted escape as it climbed the wall of a small plastic aquarium.  In the midst of its journey it deposited a small green pile, then crawled over it.  The opening on the left (the snail’s right) is the breathing pore (pneumostome).  Its anus is located in the pneumostome!  We are talking bad breath!  Chris Barnhart tells me that "they often stand on the feces like that. I’m not sure why, but it might have something to do with recovering salts. They can absorb ions through the foot."

When you move as slowly as a snail, you can't be too particular about what you eat.  Most tend to be omnivores eating plant material, fungi, and anything in their path.  Some snails are even predatory!  Our little friends have been rasping away at the tops trimmed off of our sweet peppers.  They use their radula, a tongue equivalent with rasp-like teeth built for scraping the surface of food into the esophagus, but even here there is tremendous differences between species.


"The radula is a membrane covered with series of tiny teeth made of chitin, so it is coarse like sandpaper. The shapes of these small teeth are used to help identify some snail species. However, the teeth of the radula should not be confused with denticles in the aperture of a snail’s shell, which are often referred to as “teeth” as well.
The radula is drawn over a ridge of cartilage (the odontophore), somewhat like a chainsaw chain slides around its bar - though it moves back and forth rather than in a circular motion. Bits of food are broken off and drawn into the snail’s esophagus for digestion. Several bouts of crawling and feeding can occur during an outing.
If you allow a larger snail to crawl on your hand, you may be able to feel it “taste,” or rasp, your skin – the sensation is painless, but feels like a cat’s licking."  Carnegie Museum of Natural History


And now the slime.  It was best demonstrated on a colored tablecloth which one of our snails escaped to after climbing out of the aquarium.  Note to self:  Close top of aquarium to maintain domestic harmony.  Since leaving its aquatic origins, preservation of its water has become critical.  A snail's slime is essentially mucous composed mostly of water protecting it against evaporation.  The slime can serve as a lubricant or an adhesive.  When one of our snails tried to escape across the table it left a trail of adhesive slime that lifted the tablecloth when I tried to pick it up.   The chemistry can be far more complicated as in the common garden snail, Cornu aspersum.


In the case of Cornu aspersa, the discharge is composed of synthesized products from various types of secretory glands. These are all single cell glands found in connective tissue and secrete their products via pores that pass between the epidermal cells. They are of various shapes and usually have a long excretory duct. There are eight different types of secreting glands. Four of these different types of mucus secreted protein, calcium, pigments, and lipids.  Wikipedia

There is a sinister side to little snails like this.  Brainworm, Parelaphostrongylus tenuis, is a parasitic nematode commonly affecting the brain of white-tail deer.  The worm lays eggs in the meningeal tissue of the deer which pass into the lungs where they hatch.  The larvae then are coughed up and swallowed, and eventually passed out in the feces.  Slugs and snails pick up the larvae which live in them as intermediate hosts until the mollusks are eaten by deer, starting the cycle again.  They pose no risks to the snail or humans.

Our snails are now living under a large rotting oak log, hopefully rasping away at fungal hyphae and sharing the story of their visit with the 5th grade class.  You can watch the snails move at a snail's pace x4 here.

Resources
The Living World of Mollusks
More on the White-lipped Globe Snail is in this
University of Florida link.
Gastropod reproduction
Snail anatomy, the source of the diagram above.
Posted by Bob and Barb at 3:00 AM