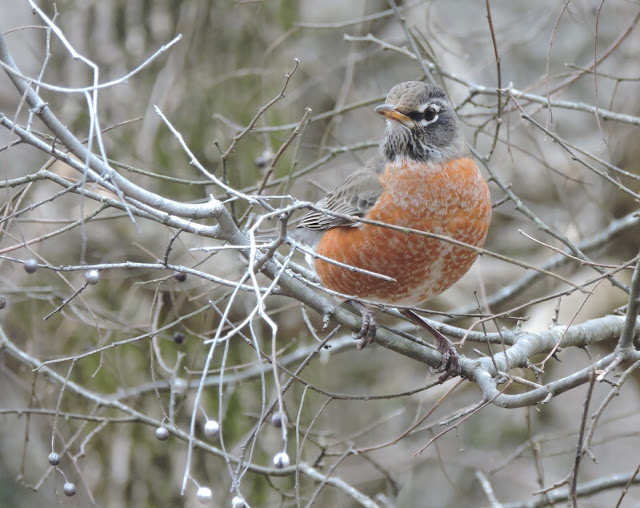 We were visited by a flock of hungry robins this morning.  They were drawn to the dwarf hackberry tree off our deck.  I had used the bare branches to hold vine dream catcher rings I was spraying with silver paint last week, leaving some of the black berries glistening.  There were several dozen birds with a strong attitude, fluttering in and competing for the black fruit, only occasionally sampling the silver ones which they would then drop to the ground.

Dwarf hackberry (Celtis tenuifolia) is a short glade adapted relative of the common hackberry, Celtis occidentalis.  The fruit is small but colorful, starting out a bright green, then orange, blending into red, ending up black in winter.  It is sometimes called a sugarberry but is actually a drupe, with a single large seed which makes up 90% of the volume.  The thin rim of flesh is sweet to my tongue even now though they are dry in winter.  The flesh is remarkably high in calories from fat, carbohydrate and protein, making the effort worthwhile for the birds.

In the midst of the robin onslaught a lone cedar waxwing arrived, consuming one berry before being driven off.  Its black eye band resembles a mask, giving it a threatening look.  Unlike the robins that are scattered in the woods,  a flock of waxwings tend to attack one or two cedars at a time, stripping all the cedar berries (actually miniature cones), leaving the ground beneath covered with litter.

Robins gather in flocks this time of year and we have seen up to 50 clustered on the creek bank out of the wind, browsing for seeds.  They will scatter out, picking at the berries on the cedars surrounding our house on an overgrown glade.  If you look along fence lines on field edges you will see small cedars they planted while seated on their barbwire toilet. 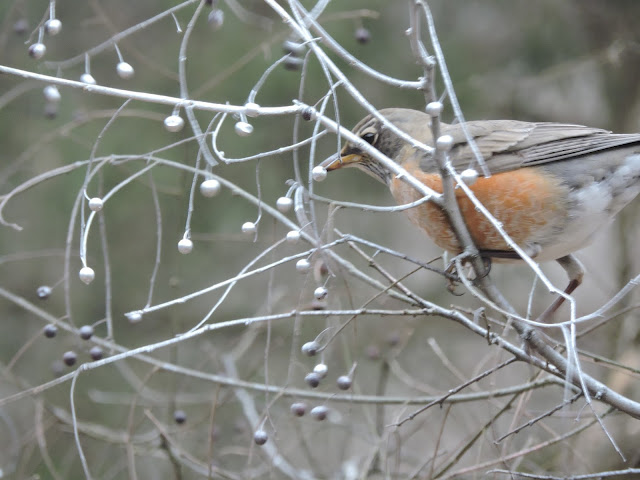 I wonder if the robins attacking the silver sprayed drupes didn't get the flavor and therefore dropped them.  Who knows what toxins they might have consumed if eaten?  On the other hand, they may just not be into shiny things.
Posted by Bob and Barb at 10:05 AM