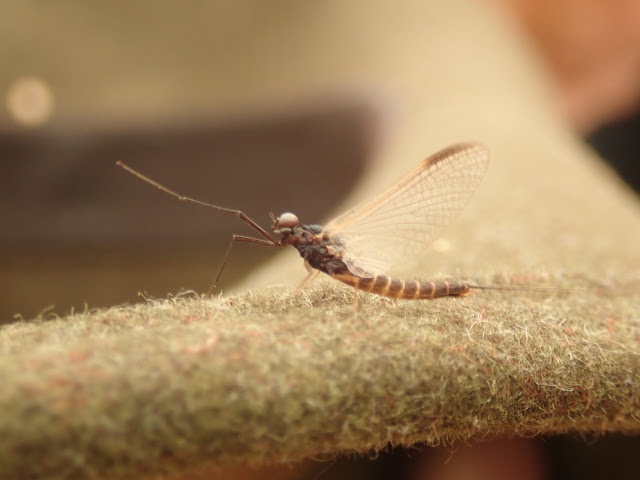 We were standing near the creek when my wife, Barb, started giving me a strange look.  I get a lot of those looks from her but in this case she said, "There is an interesting bug on your hat."  We then did what any Master Naturalists would do, she held my hat while I photographed it.

This was our first mayfly of the season.  There are 6,000 species of them worldwide which make up the order Ephemeroptera.  Surprisingly their closest relatives are dragonflies.  The "ephemer" comes from the Greek "living a day" and that pretty much sums up the life span of the adult, a trait noted as far back as Aristotle.

They come out suddenly in large numbers and tend to occur in swarms just above the water after emerging.  With such a short lifespan they don't waste time eating or drinking but get right to business in the mating game.  It is described like this in Wikipedia.


"Each insect has a characteristic up-and-down pattern of movement; strong wingbeats propel it upwards and forwards with the tail sloping down; when it stops moving its wings, it falls passively with the abdomen tilted upwards. Females fly into these swarms, and mating takes place in the air. A rising male clasps the thorax of a female from below using his front legs bent upwards, and inseminates her. Copulation may last just a few seconds, but occasionally a pair remains in tandem and flutters to the ground."

The female will then lay 400 to 3,000 eggs on the surface of the water.  After anywhere from a few days to a year, the larvae, called nymphs, will emerge and begin a series of 10-50 moults, more than almost any other order of insects.  It is these critters that we count in our stream team surveys.  The next step toward adulthood gets very interesting.  I will yield to UC Berkeley to describe it.


When it comes time for the last nymph stage to molt into a subimago (the first flying stage), the guts empty out and the mid-gut section fills with air. Often, many nymphs will then simultaneously let go of their hold on their anchor in the water and float up to the top. Once they reach the air, the cuticle splits open on the thorax and the wings come out. This is the time of greatest vulnerability in their lives as they float on the water before they are strong enough to fly. The subimago has short hairs on the wings and on the body; the wings are dull and pigmented.

Once it gains some strength, it flies from the water to some form of shelter such as a tree, long grass, or the underside of a bridge and molts again within 24 to 48 hours. This additional molt to an adult called an imago allows the legs and tails of the insect to grow more. Longer tails give more stability in flight, and longer legs make it easier for the male to grasp the female in mating."

The adult on my hat took off, either headed back to the creek to look for love or else ready to give it up.  The species depends on high volume reproduction for survival as the eggs and larvae are an important link in the food chain.  The eggs are eaten by aquatic snails and caddisfly larvae and the nymphs feed flies, water beetles, fish, frogs, and birds, as well as fly fishing fanatics who will spend more time tying the perfect imitation mayfly than the original does mating.

Linda Bower MN has this video of a Prong-gilled Mayfly (Leptophlebia intermedia) larva feeding and, of course, her trademark  "pooping."

I am including this March brown mayfly resting on a rough horsetail, Equisetum hyemale, stem, because it is resting on a scouring rush, a plant species coming soon to a blog near you.