Jill Hayes was down prowling the creek today with her friend Hannah and sent me pictures of the first hepatica of Spring.  Another common name is liverleaf and both names refer to the deep beef red color of the leaves in winter.  The leaves are three lobed and stand up on a hairy stalk.  As spring warms up the leaves will turn green as it produces chlorophyll to start the new growing season.  The brownish green basal leaves are said to be poisonous and it seems unlikely that they are eaten by mammalian herbivores to any significant extent. 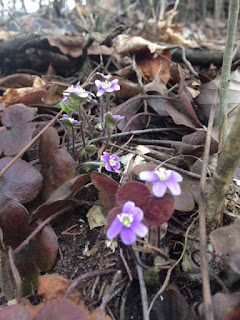 According to the USDA Forest Service link "the flowers are most commonly blue or lavender, although white forms may be common locally, especially in southern areas, and there may be various shades of pink." They too are on a hairy stalk. Missouri is in the southwestern edge of its range.

Liverleaf is also commonly called hepatica because of its previous species name Hepatica nobilis var. obtusa.  That was in the "good old days," but since it was one of the few plant names I knew, they had to change it to Anemone americana to confuse me as rationalized here.

One of the cool things about liverleaf is its propagation.  While it is self-pollinating and doesn't need insects for that step, it depends on ants to move and plant its seeds.  Each seed has an elaiosome, a small, soft appendage that contains fatty nutrition.  Ants pick up the seed and take it home with them, eating their treat while not harming the seed, a process called myrmecochory.  Frequently it ends up in a pile of ant poop, dispersed and fertilized at the same time.

Liverleaf is not the only hepatica you can see at Bull Mills.  This is Fistulina hepatica, commonly called the beefsteak or oxtongue fungus.  It is a polypore fungus that is primarily saprophytic, growing on tree trunks and stumps, a sign that the tree has seen its better days.  The flesh is soft and when cut or squeezed it exudes a blood like juice.  And no, it is not edible, not that anyone I know would be even tempted.
=====
More on liverleaf is at skymea  dows.info.
Posted by Bob and Barb at 3:00 AM