A dead tree along the lane at Bull Creek has been losing large branches and I was tempted to fell it but held off as it was potential bird habitat, never dreaming that we would hit the jackpot.  Last week, Chris Barnhart told me that a Pileated Woodpecker (PW) had flown into a new hole.  A few days later I set up my camera and made seven 28 minute videos, leaving them alone each time to encourage their normal habits. 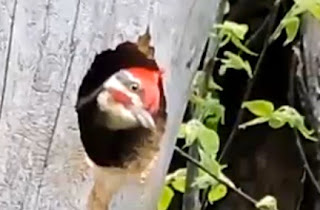 Every 10 to 20 minutes one would stick its head out to look around and maybe to hear any calls.  It would look in different directions and sometimes twist its head as though listening intently for its mate.  They appeared to be taking 2 hour shifts, probably trading off incubating their eggs, a chore shared by males.  The bird to the right is a male, identified by a red streak on the cheek behind the bill.

PWs are uncommonly seen up close.  They are a bird of the forest, preferring dense woods with large trees.  It is distinctly uncommon to be able to observe them at a nest this close up.    We occasionally hear their call across the valley but usually only get a rare glimpse up in the woods.  Cornell's All About Birds recordings refer to their "wuk" call but I think the Audibon.org field guide description as a cuk-cuk-cuk is more descriptive.  With a long series of calls it tends to rise in pitch, then fall at the end.  You can hear one getting its "yucks"at the start of this video that I compiled of the day's highlights.

Highlights of the video on Youtube.
0:00  The male calls and the female sticks out her head to listen.  Female flies out of the nest, then the male arrives10 seconds later.
0:33  Male peering out of the nest.
0:54  Female arrives and they trade places
1:45  Female leaves and male returns

I am intrigued by the way a woodpecker can effortlessly hop up a smooth tree, seeming to have both feet off the trunk at the same time.  Viewing at 1/8th the speed you can barely make out the fact that it holds on with one foot for a split second while moving the other foot.  The tail feathers are strong and somewhat stiff, necessary to prop the bird upright.  Imagine how much pressure is applied on them when the woodpecker is excavating the hole!