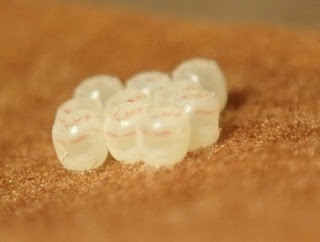 One of our WOLF School students gave me this leaf from the playground.  On the underside there was a tiny tightly packed cluster of eggs.  She recognized that they might be eggs, but of what?  Under magnification, the eggs were a cloudy white with a faint pink line.  The cluster was typical of stink bugs eggs.  I did what any other sophisticated biologist with my training would do.  I put the leaf in a ziplock bag and waited for nature to take its course. 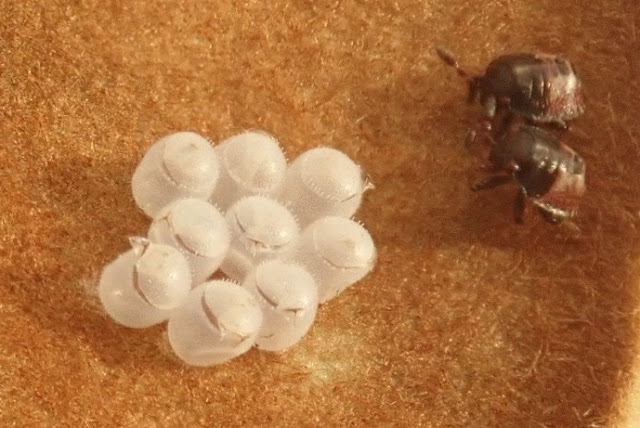 Five days later was the great "coming out."  The tiny 2mm creatures were clustered around the empty egg mass, but by the time I got out my camera they were on the move.  The eggs were still in place but the tops were ajar where the larvae had chewed their way to freedom.  They seemed larger than the egg they had emerged from, a phenomena that any human mother can appreciate. 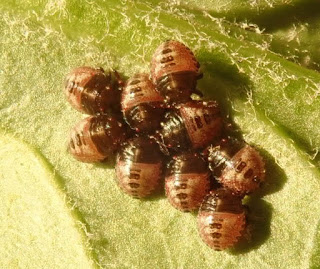 Under better light as seen above, these can be identified as brown marmorated stink bugs (MBSB), Halyomorpha halys.  I bagged the larvae in with assorted fresh leaves from Barb's flower garden (all native species of course) and the next morning they were all tightly clustered on the underside of a squaw weed leaf, Packera obovata.  When disturbed they began to move, as seen in this somewhat shaky video.  I challenge you to try making a video of 2mm crawling nymphs after your second cup of coffee.

BMSB is a species accidentally introduced from Asia and first collected in 1998.  It has rapidly moved across the country and is now found in Europe and South America.  It is found in wooded urban areas as well as orchards where it has become a major pest.  Like most other stink bugs it feeds by sticking its proboscis into the plant and injecting juices that digest the plant.  This leaves fruits dimpled with rotting inside, making them unsaleable.  For most of us, it seems likely that we will become more intimately acquainted with BMSB in our personal lives.


"Late in the season, adults will enter homes and other buildings when seeking sheltered sites to overwinter or diapause. During the several weeks of peak flight, many insects can enter homes through any small opening, mostly around windows. In Japan, the BMSB is a well-known nuisance pest for this reason, and the same situation is now common in Allentown, Pennsylvania in late September and early October.  As the insect spreads to new areas, this aggregation behavior will probably again attract attention and ironically assist in monitoring its distribution." Entnemdept.ufl.edu


They progress through 6 instars before reaching adulthood with the brown marmorated color, meaning having a marbled or streaked appearance.  The 5th instar is my personal favorite but sadly they won't be reaching this stage in our house.  (Mama don't allow no stinking invasive species around here.)
============
The University of Florida Entomology Department has more detailed information.

There are some "good" stinkbugs that are predatory, feasting of insects that you don't want in your garden.  This website has photographs to help you tell the difference between them but the easiest feature is the sharply pointed shoulder spines seen below. 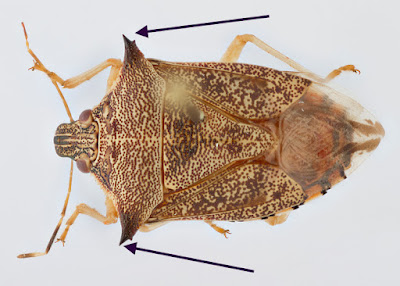