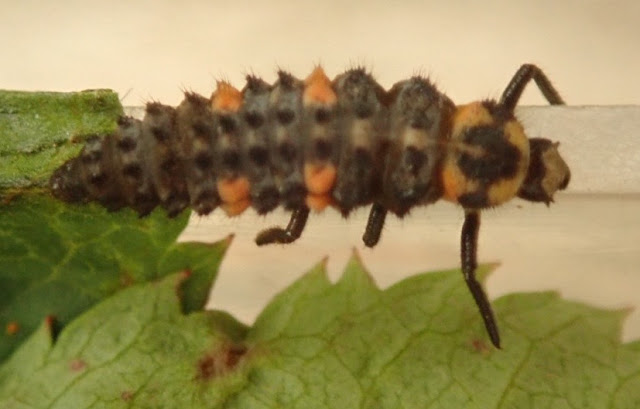 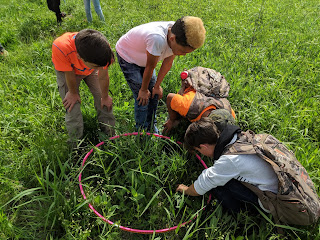 Wednesday's WOLF School field trip to the Missouri Prairie Foundation's La Petite Gemme Prairie was a great success.  With Jay Barber (MDC) and Jerod Huebner (MPF) we divided the WOLFs into three teams.  The WOLF students in my exercise counted the different plants by appearance within a hula hoop (14 to a record of 22 species) before the hunt for insects began in earnest.  Nothing can put terror in an insect's heart as the sight of a 5th grader armed with a sweep net.* 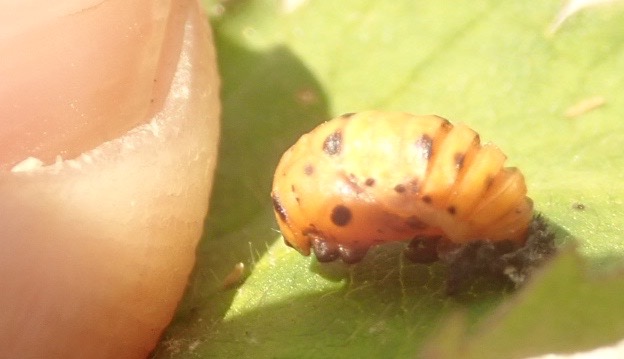 Students started finding leaves with small orange and black lumps adhering to them.  These were the pupae of ladybeetles, called ladybugs, but these ladies aren't really bugs but beetles in the order Coleoptera.  They make pupae, similar to the more familiar cocoons of moths and chrysalis of butterflies. 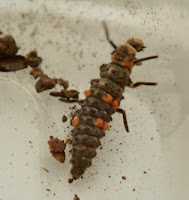 The students found an occasional black larva with yellow-orange stripes and spots.  Now we had the question of which ladybeetle.  Until recently this would have meant a trip to Google and the books but that is changing.  INaturalist.org has gotten much better with time and submitting the photograph of our larva brought up the top 10 likely species.  A quick comparison with online photographs of the top two picks confirmed the ID of the Convergent Lady Beetle, Hippodamia convergens. 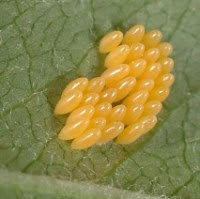 "Clusters of yellow eggs are laid by the adult female beetle in batches of 10-30 eggs on stems or leaves of plants where abundant insect prey is present. Individual eggs are spindle-shaped and 1-1.5 mm (≈1/20th inch) long and laid pointing upwards."  (University of Florida Entomology).  The tiny larva that emerges is born hungry and will feed on aphids or even the eggs of its siblings.  The first instar is predominantly black but each molting the amount of orange color increases.  Ours were the final instar before forming a pupa.
One of the students noticed a pupa that showed some movement.  Just like the Luna Moth pupa that they had seen dancing last fall (see the video) last fall, this one demonstrated its predator evasion moves for the students while we filmed it here. 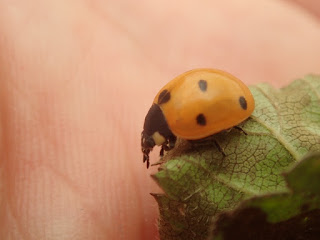 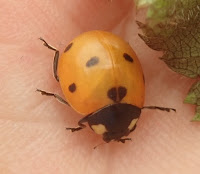 I brought home a few of the pupae and the very next morning all of them had emerged and were crawling around the insect box.  Unlike the stinking, nipping and obnoxious Asian Ladybeetles that invade our homes, the Convergent Ladybeetle is well mannered and welcome in our gardens.  An adult can consume 30-50 aphids a day as well as other bug eggs and even honeydew, nectar, and pollen when prey is scarce.  They are important natural biological control agents in commercial fields plagued by aphids and other insect pests.  Out on the prairie, they were just doing their own thing as a part of the food web.


================
* Few insects were harmed aside from net bruises.  Species the students found included:
La Petite Gemme Prairie is indeed a "little gem."  At only 37 acres, it is one of Missouri’s smaller tracts of original, unplowed prairie, yet it is packed with a documented 335 native plant species, and with the greatest diversity of prairie plants on a quarter-meter scale (38 species) found to date in Missouri.