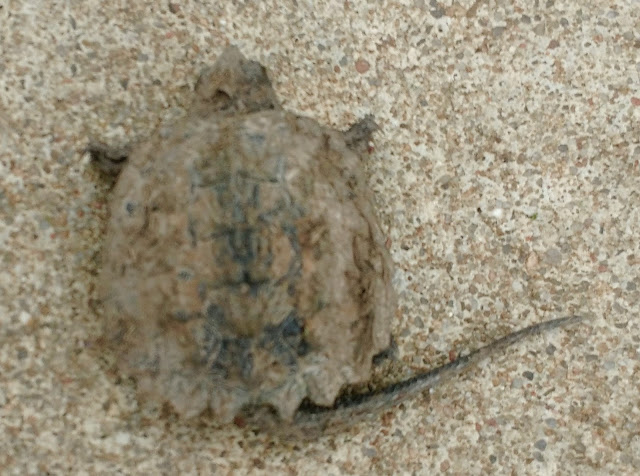 We were walking around Lake Drummond at the Botanical Center after the big rains.  There was occasional small debris on the sidewalk, including this indistinct brown patch which a sharp eyed friend noticed was a baby turtle.  I picked it up and since it didn't move we pronounced it dead.  I put it in my shirt pocket to take to the WOLF class. 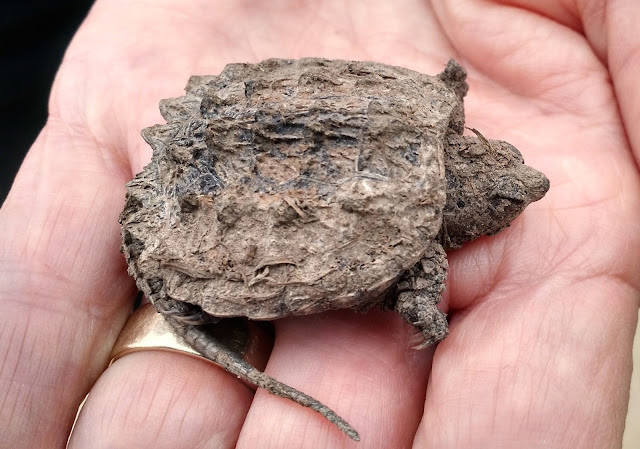 Back at home Barb put the body on a counter top so our dog wouldn't get it. The next morning she found it on the living room carpet 25 feet away and saw some motion in its tail.  We revised its prognosis and moved it to a makeshift aquarium that previously contained margarine.

This is a common snapping turtle (Chelydra serpentina), likely a hatchling from last fall although on rare occasions they won't exit their ping pong ball size shell until spring.  A newborn averages one inch long and ours is 1.3 inches.  The carapace (top shell) has rough ridges in a young turtle that will become smooth over several years. 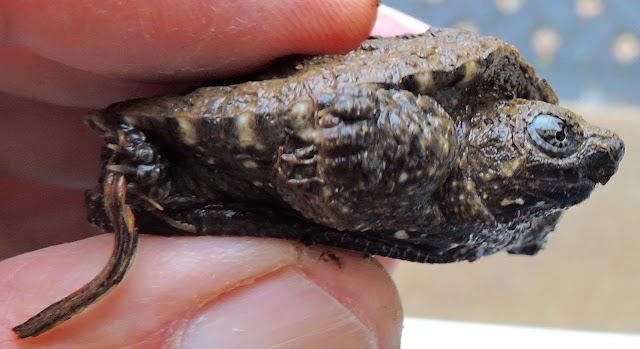 The head is relatively large and triangular with a pointed nose.  From the side you can appreciate the curved parrot beak.  It has no teeth but doesn't need them as the wide jaws and bony beak have lots of clamping power.  The ventral view of the carapace below shows its rough surface that will become smooth with age as it drags if over the ground.

Snapping turtles are omnivores, eating mostly animal matter in the winter and switching to aquatic vegetation when the waters warm up.  We are trying this one on leaf spinach until we get some meal worms tomorrow.  Meanwhile, under a desk lamp for warmth, it is now stretching out and relaxing.

We only picked the turtle up in the park because it was "dead." After its visit to the WOLF school it will be back in the wild this weekend, hopefully basking in the sun.

Past adult snapping turtle blog
Posted by Bob and Barb at 5:44 PM