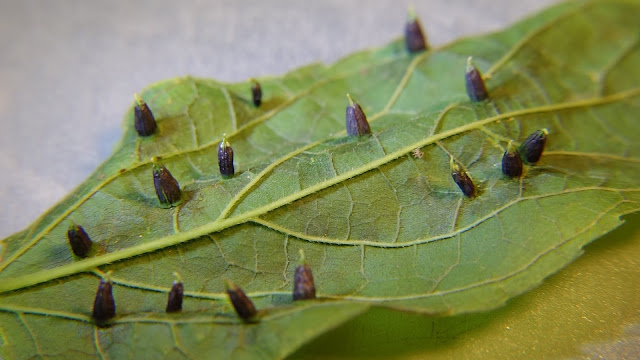 Linda Bower sent me these pictures of some cool galls on hackberry leaves. The little spike on top was very distinctive.  I think they are Hackberry Thorn Galls produced by a midge, Celticecis spiniformis.  As is true of many galls, the midge is rarely photographed or identified and they are known by their gall.  In the case of hackberry leaf galls, there are lots of different shapes and I was lucky that this one is so unique with the little horn on top.

C. spiniformis was first described in 1895 and by 2011 there were ten Celticecis species described.*  Raymond Gagné and John C. Moser** identified many more and now there are 23 known species of hackberry gall midges in North America, 21 of which are in the Celticecis genus.  They can occur on any of the Hackberry (Celtis) species.

The galls grow rapidly in spring to early summer.  The larva to the right would ordinarily form a cocoon in the gall.  When the leaf falls to the ground the gall bursts open and the cocoon remains on the ground over winter.  They generally pupate the next spring although some may spend another year in the gall before emerging as adults.  The midges mate in the spring although they are very discrete and have not been filmed doing that.  They lay their eggs on hackberry leaves and the cycle begins again.