Pupa on a Silk Rope 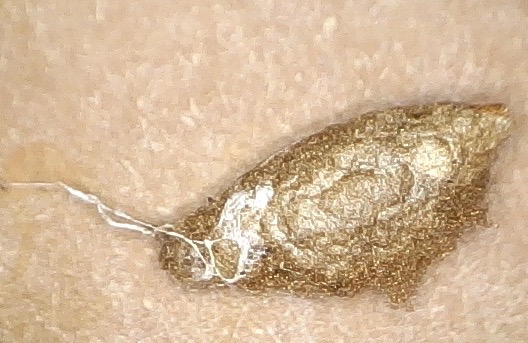 On a sunny day in March we went on a long slow walk with Nels Holmberg looking at bryophytes (mosses and liverworts).  Slowing down and getting on my knees gave me a chance to see things like this half inch pupa case dangling on silk strands from a dead branch just above the ground.  It looked like it was hanging from the remnants of a spider nest.  I took it home and waited to see what might emerge. 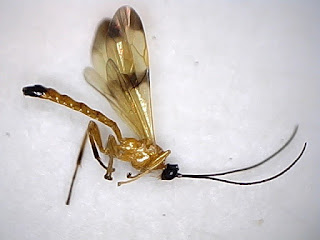 On May 26 I found this wasp with the empty pupa case.  It had crawled out over the prior week and had a lonely death, never having found love.  After a lot of searching I sent it to Bugguide where it was identified as Acrotaphus wiltii.  This distinctive beauty is "a parasite of the arabesque orb weaver, Neoscona arabesca. The wasp stings the spider to briefly paralyze it while she lays a single egg on it. The larva is an external parasite." (Eric Eaton in Bugguide)

This explains the silk rope that the pupa was dangling from.  After the larva had killed the spider it pupated and was suspended from the spider's web and the silk was twisted into a tangled cable over time.*  It survived the winter hanging close to the ground.  The wasp would normally emerge and search a mate.  The female would then search out a tiny spider and lay the fatal egg.  The larva would then cling onto the spider, feeding on it.

Like most other Ichneumon wasps, she comes equipped with a dangerous looking but harmless ovipositor, that is harmless to us but not to the right brand of spider.  There is a bit of irony in the fearsome tailpiece that can paralyze a novice with fear.  The stingers of hymenoptera (wasps, bees, etc.) are actually modified ovipositors, now producing painful venom which can paralyze prey, such as spiders, that a wasp can take back to store as food for its emerging larva. 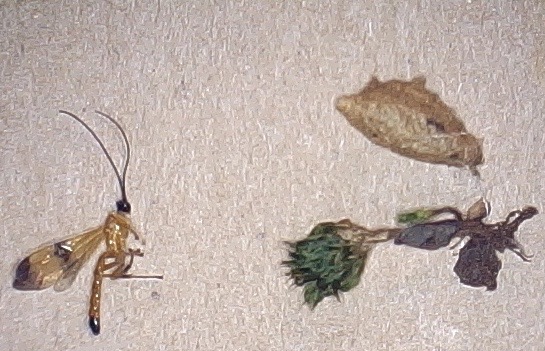 *Charley Eiseman has a set of photos in his Bugtracks Blog showing the larva with its spider victim before and after pupating.
Posted by Bob and Barb at 6:50 AM