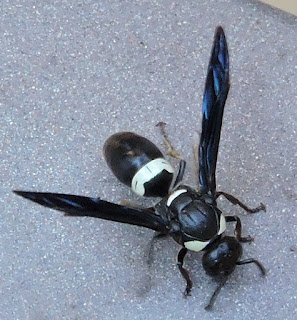 This wasp spent a long time around our deck, crawling over the furniture and even the rim of my coffee cup.  After a long internet search, I settled on Euodynerus bidens, a potter wasp.  Two hours later, Bugguide corrected me with an ID of a Four-toothed Mason Wasp (Monobia quadridens).  There was some solace in the comment that they are almost identical, the main difference being a small white spot on the first abdominal segment and on the temples behind the eyes.  The marked similarity is even more remarkable; it developed independently as they are in separate genera.

Both of these wasps are in the Eumeninae family of potter and mason wasps. M. Quadridens is much more common compared to E. bidens.  It is usually found around open areas on flowers and the adult feeds on nectar.  The female collects caterpillars of tiny moths (microlepidoptera) such as grass moths and leaf roller moths.  She will find holes in wood or hollow stems, lay an egg in it and provision it with a caterpillar paralyzed by her sting before partitioning it off with mud, thus the name mason wasp.  The common name of mason refers to these mud walls.  A few species called potter wasps make their artistic
pottery out of mud.

This is our second encounter with M. quadridens.  Last year one was spotted at our cabin, preparing a nest in a carpenter bee hole.  They commonly use these and if occupied by the bee they will kill the bee, eggs, larvae and even pupae.  Bug Eric explains that they make an empty chamber between each egg chamber, presumably to convince predators that no one is home.  They have two broods a year, the fall class over wintering as pupae.
As they obtain their nectar, they also serve as important pollinators.  The female can sting if you grab it but is not aggressive like its look-alike baldfaced hornet.  Interestingly, the male doesn't have a stinger but can "sting" with the tip of its abdomen, a quick pain with no venom.  Over all they are good neighbors to have around your garden.  You can encourage them by making nesting sites.  Carl and Jessie Haworth have been doing this for some time with fancier designs than mine above.

And finally, where does the name Four-toothed Mason Wasp come from?  Sorry, nobody apparently knows or is talking.
============