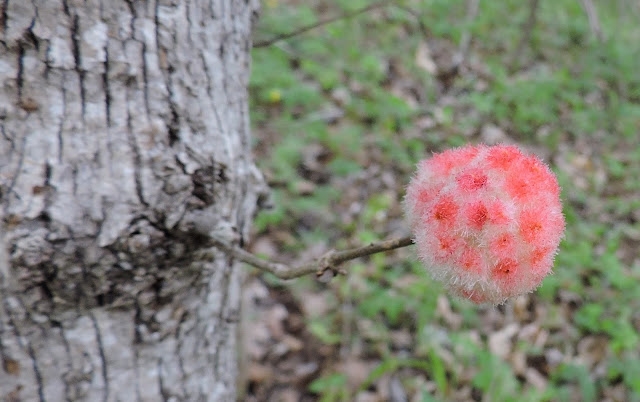 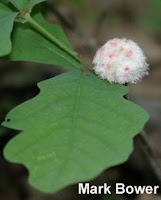 Our friend Brandon Butler asked me if I hunt.  I initially said no, then realized that I hunt almost daily, I just don't shoot.  Sometimes I eat my finds (mushrooms), other times I photograph my prey and put them under the microscope.  I usually "catch and release" when possible but many of my prey are larvae that won't survive or occasionally die from chilling for photographing or saved as specimens.  I love the hunt. 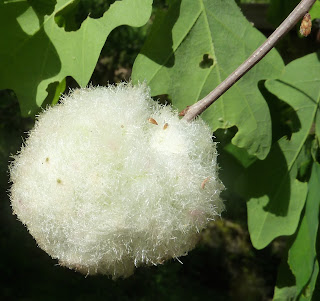 Early summer is a great time for gall hunting.  As the leaves and buds are coming out, it is easy to spot the various oak galls which are frequently at their most colorful.  A few weeks later they are hidden in the leaves and require lots of patience to sneak up on them.  They can be very evasive, requiring lots of time to find a specimen I flagged just a week before.  This Wool Sower Gall was an excellent example.  It was the size of the tip of my thumb, obvious in the photograph but hard to recapture in the foliage.

The most distinctive oak galls are produced by  Cynipid (sin-a-pid) gall wasps.  These wasps are from 1-8 mm in length and many have a distinct hump on the back.  They lay their eggs on a specific plant and the eggs hatch as tiny larvae whose secretions cause the plant to form a gall around them.  The gall in turn provides both protection and nutrition.  How it does it remains a mystery.  Each species produces a distinctive gall and most are identified by their gall rather than their appearance. 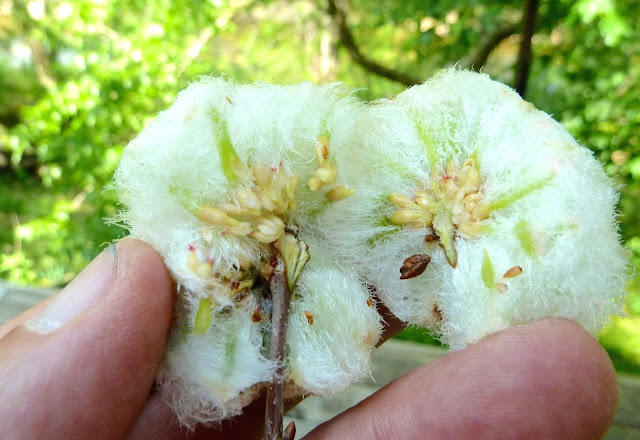 The Wool Sower Gall (WSG) is an excellent example to study, colorful and yet infrequent enough to be elusive.  The gall looks like a cotton ball that sometimes has distinctive pink spots.  It is also called an Oak Seed gall, due to the seed-like appearance of the early larva capsules inside the gall.  The gall is produced by the secretions of the grubs of a tiny gall wasp, Callirhytis seminator.  Unlike the more common Oak Apple Gall which houses a single larva, these galls contain lots of "seeds", each containing a wasp larva.

After splitting one open I photographed the larvae inside.  Each lives on the nutrition produced by the oak, a special blend of sauce and spices created especially for its species.  Ordinarily it will live here until mid summer when it will emerge, but my razor blade has ended its chance to reach maturity.

The gall at the top of the page was left on the tree until it started to dry up.  I kept it in a ziplock bag for 10 days until the first wasp emerged.  It looked like a tiny black spot on the wall of the bag, measuring only 2.5 mm under the microscope.  I would have assumed under the circumstances that it would be C. seminator  but even I could tell at a glance that it isn't.  My first clue was her ovipositor which is longer than the wasp's body.

I sent pictures in to Bugguide and the response was even more interesting.  Ross Hill responded rapidly, identifying it as Torymus tubicola, "a known parasitoid of Callirhytis seminator."  He sent it on to Eric Grissell who confirmed the ID.  There are over 400 species Torymus species world wide and it takes an expert to get an identification to species level.  I didn't expect to find much more information on this species, but finally ran across this blog by who else but Eric Eaton, aka Bug Eric.  Charlie Eiseman also reported on several he raised.

Meanwhile, I am continuing my attempt to photograph C. seminator when it emerges from its custom built gall.  I think it is incredibly cool that a 2.5 mm wasp can lay an egg on a mighty white oak twig, the larva then produces enzymes, hormones or who knows what combination that causes the oak to create specially designed housing for it to grow up in, protected from the elements.  There is a master's thesis in this but better yet a source of wonder for any kid like me that finds one when out hunting.
Posted by Bob and Barb at 4:43 PM