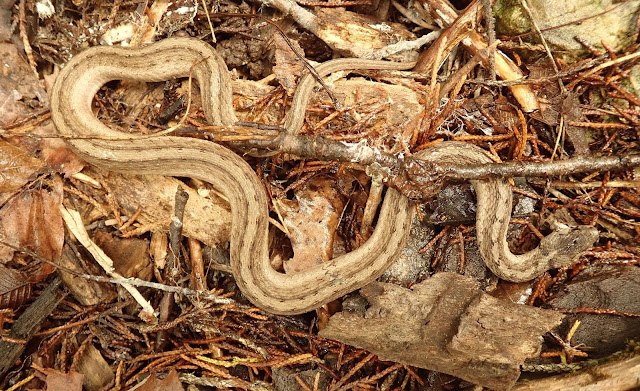 While standing around waiting where I park my truck, I randomly picked up a small slab of bark and found this snake.  My first guess was an eastern garter snake, Thamnophis sirttails sirtalis, but Brian Edmond corrected me.  This is a midland brown snake (MBS), Storeria dekayi.

The MBS is described as shy and secretive, living a quiet life in moist leaf litter, feeding on slugs, snails, and earthworms.  Its blunt head and backward pointing teeth are thought to be an advantage in eating snails.  They can hang onto the snail's head for a long period of time until it is fatigued and can be pulled out of its shell. 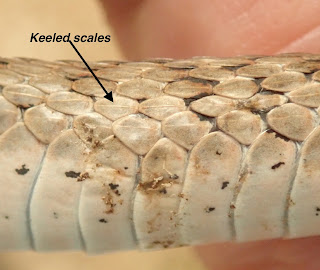 MBS has tan and brown skin with subtle spots that is perfect camouflage for its habitat. It has a slightly rough feel due to keeled scales along the back, longitudinal ridges like the keel on a canoe.  Unlike the garter snake which tries to act tough with false strikes and trying to bite, this docile snake just wanted to get away.


As I held it for pictures it would flicker its tongue.  I realized I could get its tongue out by holding my finger in front of it.  This video shows our snake's tongue in slow motion.  A snake's tongue can detect nonvolatile chemicals that its nose can't smell.  It is a way to identify prey as well as identify others of its species and chose a mate.*  It may also be involved it following the trail of prey although this is still being debated.

Like other snakes, our friend has a forked tongue and I started wondering why that adaptation that is common to reptiles, most snakes, and a few lizards.  It turns out that it increases the surface area of the tongue to pick up smaller amounts of chemicals.  Also this gives the animal a sense of left-right direction from odors, similar to how ears on both sides of the head help us locate sound.

Our MBS was only twelve inches long and is unlikely to be mistaken for any venomous snake except a young pygmy rattlesnake.  Hopefully it will live a long and snail-full life, if it doesn't get under my truck.
=====
* Of_tongues_and_noses
Thanks to Linda Bower for editing the video.
Posted by Bob and Barb at 2:30 AM