I am sad to announce the recent accidental death of an old acquaintance of mine here at the creek, a Northern Watersnake, Nerodia sipedon sipedon.  It was more of a neighbor than a close friend, hanging out in our deep swimming hole.  One of my first encounters was watching it bask on a stump back in 2002.

It was larger than the other watersnakes and more confident, continuing to swim by as I would snorkel the pool.  Cruising the bedrock bank to investigate the fist-sized underwater openings that I never had the nerve to reach into, it would crawl halfway in, I could come up behind it and gently pet it as it froze but didn't panic, a apparent agreement we had to not harm each other. 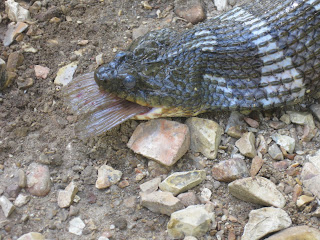 Once my friend Larry Whiteley raced up on an ATV to get my camera.  He had seen the snake in the process of swallowing a perch at a creek crossing.  We got there just as it was finishing up, patiently working the tail into its mouth as the final bite of a dinner that could last a few weeks.  It laid patiently on the edge of the bank until it completely swallowed, then swam leisurely away, satisfied it had entertained us enough. 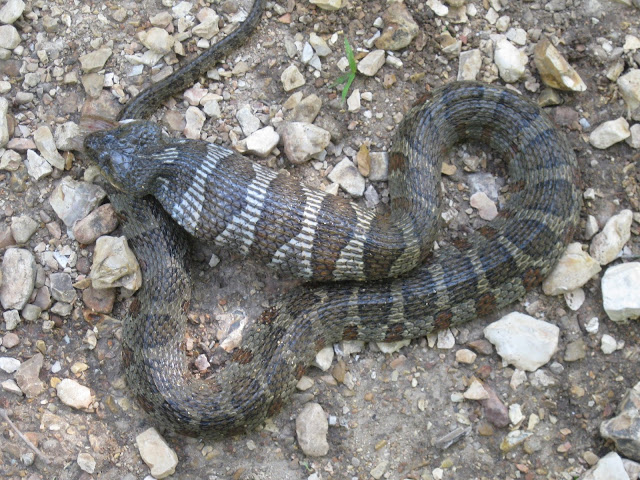 Just a few months ago I was startled to find it on our deck, a good 12 feet above the creek.  The vibration of my footsteps caused it to move over to the edge and slide down a pole to the ground, but not until I got a picture.

Sadly it suffered an accidental death a few weeks ago at the hands of a visitor to the creek.  Many snakes are killed because of peoples' fear of any snake (Ophidiophobia), the most common of any of the phobias, reported in 1/3 of humans.  This may actually have evolutionary roots in mammals as a protective reflex.  More commonly people just "hate" snakes or aren't able to identify which ones are dangerous.

In this case there were children playing in the creek when our snake was seen swimming and was mistaken for a Cottonmouth.  They get a bad rap as being "aggressive" (more on that in a future blog), creating more fear than another venomous snake would on land where we can simply step away from perceived danger.


When our visitors texted me about it with a picture I was able to identify it on my phone.  It had the typical bands on the front third that became incomplete toward the tail and the familiar coloration.  I had them put it in our freezer so it wouldn't have died completely in vain and I could at least salvage the skin.  As we had stored a frozen rattlesnake there a few years ago which we had to kill on our deck, Barb was perfectly "cool" about this one.

All watersnakes, as well as many others, like the rough green snake, have rough skin when stroked.  This is caused by "keels," ridges on the middle of the scale like the keel of a canoe.  Viewed up close under magnification you can see them running down each scale.


I don't blame anyone for killing a snake that they think is a danger to themselves or others.  On the other hand, I would hope to teach avoidance of venomous snakes that fill an important niche in nature.  More importantly, being able to identify venomous* snake species can help people to protect and maybe even appreciate the many beneficial harmless species.

Can I be certain this is the same snake?  I hope some day to be proven wrong by seeing "our snake" cruising the swimming hole again.

=====
* To avoid an embarrassing correction from a naturalist, remember that these are venomous snakes - the venom in their bite is dangerous.  Snakes aren't "poisonous" which means it can kill you if you eat it.

Photographs of the venomous snakes of Missouri are on this web page starting on page 14.
Posted by Bob and Barb at 8:27 AM