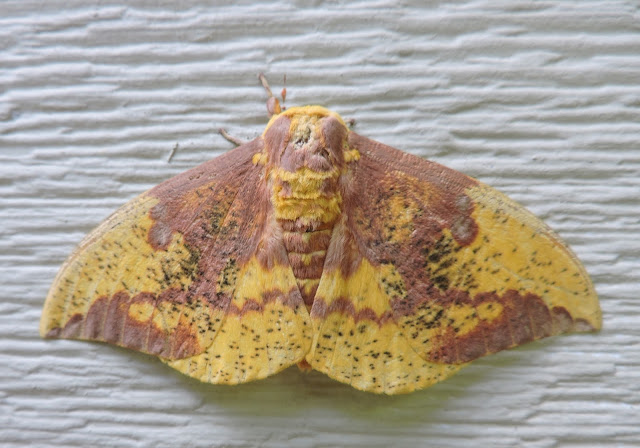 We have had a number of Imperial Moths come to our deck light the last few weeks.  As usual, most of these are males with their big feathery antennae sniffing for wafting female pheromones.  We did manage to find 3 females and as expected, they immediately started laying eggs in the paper bags that became their new homes.  Mary Bennett also found some eggs and all told we are raising over 240 eggs.

The Imperial Moth, Eacles imperialis is one of our beautiful giant silk moths.  The thought of putting a newly fertile female in a paper bag for a few days may sound cruel, but since her role is to reproduce, I think we are doing her a favor.  In nature, her larvae must emerge and take their chances with predators that are looking for them and a variety of parasitoids can lay their eggs on the caterpillars.  We are protecting her brood and feeding them.

Adult silk moths lack a digestive tract and don't eat.  Having mated, the female searches out a spot to lay eggs where the larvae will be able to find food.  She lives only long enough to meet her biological imperative.  The eggs are glued to a leaf  where they develop over two weeks.  Then they turn from clear to yellow, beginning to show the caterpillar curled up inside.*  They start to chew the inside of the eggs slowly, obtaining nutrition and eventually their freedom.  The first instar will soon emerge and start to wander around, frequently with the empty egg chorion shell still attached. 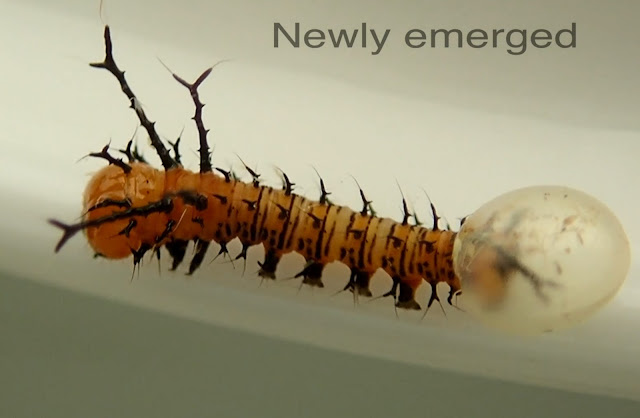 The caterpillars feed on a variety of conifer and deciduous trees.  Our caterpillars have been munching leaves of maple, sassafras and sweet gum.  We are raising them in plastic containers with tissue or coffee filters on the bottom for convenient emptying of their frass.  They are not naturally gregarious but don't seem to mind the company.  That is a good thing as with 180 eggs to go, we can't provide individual boxes.

Imperial moths are univoltine, meaning they have just one brood a year.  The final instars will be provided soil and leaf litter to crawl into where they will form their cocoons.  They will spend the winter in the garage and come out to the Butterfly House in time to emerge for the Butterfly Festival.  Then I suspect there will be a several wild and crazy nights in the trees at the Springfield Botanical Gardens.

9-14-2017 Note
As a reformed gastroenterologist, I couldn't help but notice that as they are in the 3rd instar, all their frass (poop to my younger readers) has a distinctive shape, looking like short corn cobs that were over cooked.  OK, waaay to much information but I just had to share it.


=====
*You can see the action in the eggs, the caterpillar chew its way out and eat its shell in this Youtube video.
More at Ufl.edu.
Posted by Bob and Barb at 3:00 AM