Jan Bower brought us a large specimen of a plant that was growing around their newly constructed cabin.  Her question was is it good or bad, i.e. did it have potential to produce showy flowers or feed native species?  Barb couldn't identify it right away so off it went to Linda Ellis who said, "This is a plant that likes disturbed soils, like after fire or construction, called fireweed or Erechtites hieraciifolius, no petals, just fluffy white seeds. It is an easy to pull annual." Barb groaned and said, "Ohhh yes, I should have known that." 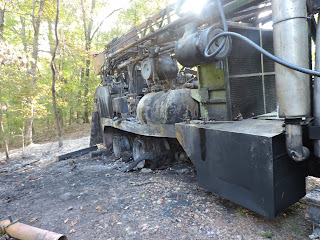 First the fireweed name.  This is a plant that loves fire and boy, did it find the right home.  As Mark and Jan were building their new cabin, they had a new well drilled one day and the drilling rig was left on the site.  That evening a neighbor saw flames and called the fire department.  A short in the battery of the rig started a fire that burned up the rig while mercifully sparing the trees.  You can see how hot the fire was from the melted tires.   And that is where the weed is now growing.

The reason botanists love Latin names is that common names are, well, common, and often given to multiple species.  Another fireweed species is Chamerion angustifolium.  Jan's fireweed,  E. hieraciifolius, is described fully in Illinoiswildflowers which lists its common name as Pilewort.  The distinctive flowers resemble buds and produce an achene.  (Word for the day - achene, a small, dry, one-seeded fruit that does not open to release the seed.)  Hint - use that in a sentence in conversation 3 times and you will always remember it.

The name Pilewort likely refers to white hair tufts on the seed, a method of dispersal by the wind.  The tufts of hairs have been used as stuffing or "pile" for pillows and stuffed animals, perfect for Jan who is famous for her artistic pillows.  That fact alone may spare the plant from mass destruction.  On the other hand, the root system is shallow and fibrous, quick to grow but easy to pull if you tire of this "weed."

Pilewort can grow from two to eight feet tall.  The flower heads are a quarter inch in diameter and covered with tiny florets, to small to appreciate.  Like most early colonizer plants, they grow quickly on bare disturbed ground before the competition moves in.  The "weed" in fireweed is a clue that they are likely to be replaced by a more "desirable" plant that we lately arrived humans decide has more value.


So what exactly is a "weed"?    My simple answer is a plant growing in the wrong place in the judgement of a lately descended bipedal ape species that itself has been growing "like a weed."  Illinoiswildflowers discusses weed criteria at length and makes an argument that sometimes we should embrace our weeds.


"...suburbia considers any plant a weed that is well-adapted to its environment, prone to reproduce itself and spread, requires little or no effort to maintain, has no obvious aesthetic or culinary properties, and doesn't require money to acquire."

Early colonizer plants on disturbed soil help to retard erosion and add nutrients to the soil when they die.  They frequently don't compete with others as the soil matures and after a few years may diminish or disappear.  Some weeds provide food for animals and insects and hemp can make human's clothes, rope and even high.
===
I would highly recommend reading the thought provoking What is a Weed from Illinois Wildflowers.

*Photo by Joseph M. DiTomaso, University of California - Davis
Posted by Bob and Barb at 6:32 PM