The April flood set a record at the Bull Creek USGS gauge at Walnut Shade and wrecked havoc along our section of creek.  It ate away well over 30 feet of bank, transporting six rows of trees planted with MN help in 2014 to Lake Taneycomo. 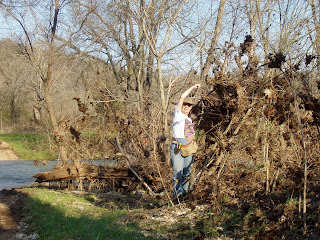 Water levels vary up and down the creek with each flood.  Our personal record was with the 2008 rains following Hurricane Ike.  The recent flood left debris 5 feet up on the trees at our road crossing the creek, far short of the 2008 record of 8' feet.  Large logs and uprooted trees littered the fields and new channels appeared below our house.  Road grading is a given.

The hidden damage comes from the invasive species seeds the floods bring down from upstream sources.  Every deluge brings a new wave of seeds to the flood plain.  Barb's self-imposed role as the Sisyphus of Bull Creek will face a new "flood" of garlic mustard and other dastardly plants, insuring that her chosen role of Invader Crusader will continue. 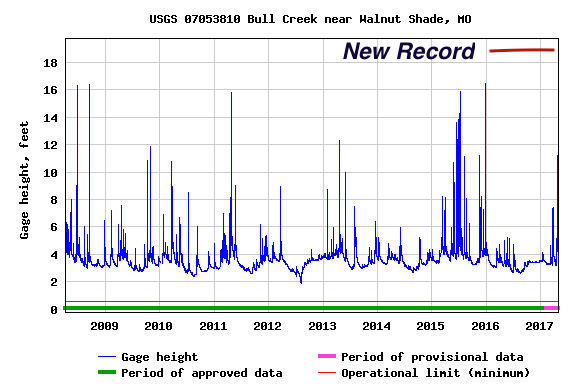 If it seems that "500 year floods" are occurring more frequently, you are not crazy.  The record of Bull Creek peaks doesn't show the data from the devastating 1993 floods that occurred before the monitoring gauge was established.   Metstat from Colorado State University has documented the rain patterns in Missouri between the events in 2015 and 2017.  Much of the local effects comes from variation in locally concentrated rainfall.