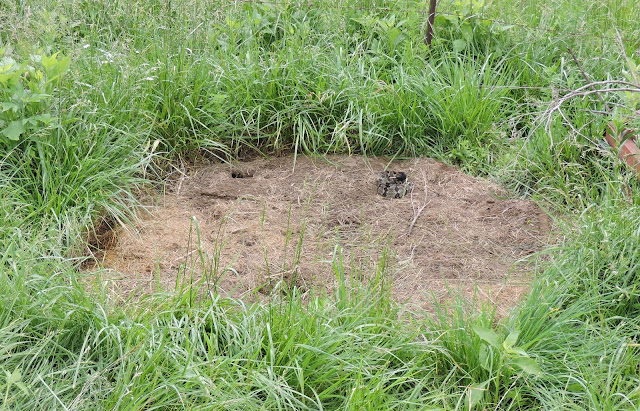 Yesterday I hooked up the brush hog to the tractor and drove about 6 feet, then looked back to check its elevation and glimpsed something in the bare shaded ground beneath where it had rested.  I had been walking around the mower in the grass just seconds before. 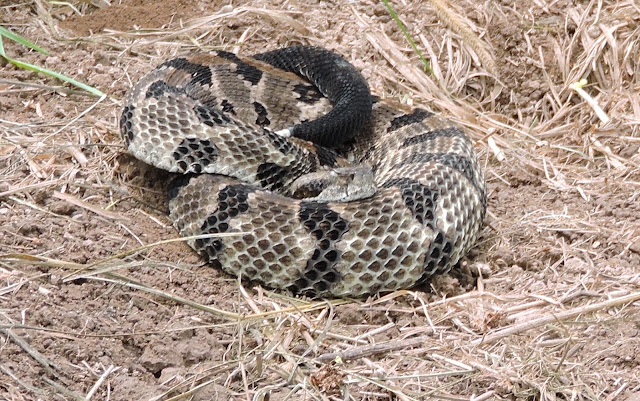 The timber rattlesnake was tightly curled and from a distance I couldn't see the head.  I raced back to the the house to get my camera and it hadn't moved.  I shot pictures with a telephoto and determined it was facing me.  It was perfectly still and maybe dead so I finally touched it with a long stick and it moved its head slightly, just enough to determine that it was alive.

When I got down low to get the face shot above, I could tell that it was grumpy.  I think its lethargy was due to the 65 degree cloudless day.  This time of day the snakes we see are usually basking in the sun.  Another possibility was that it was shedding which temporarily effects its vision and vulnerability.  Either way I could tell that it just wanted to be left alone.

When I returned an hour later it was gone.  This was in the field with Barb's garden so I mowed the grass in the field short.....real short!
Posted by Bob and Barb at 8:15 AM