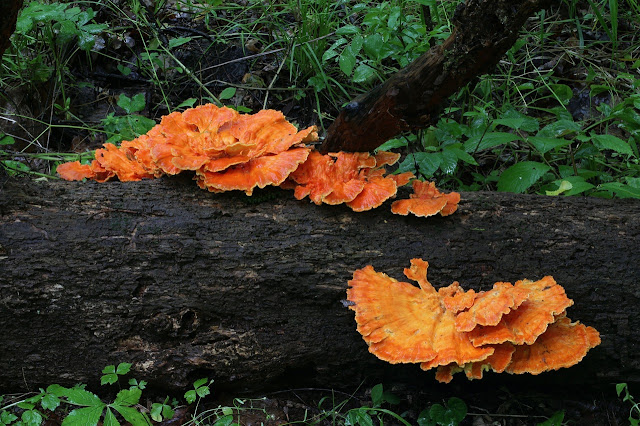 Mark Bower called to give me with directions to this beautiful sulfur Chicken of the Woods mushroom.  These are large, firm and delicious with an almost meaty texture and can be used in chicken recipes such as chicken and dumplings.  Barb tells me never to wash the mushrooms as they absorb water.  We brush them off carefully, and look in any folds as there are lots of critters that can hide there. 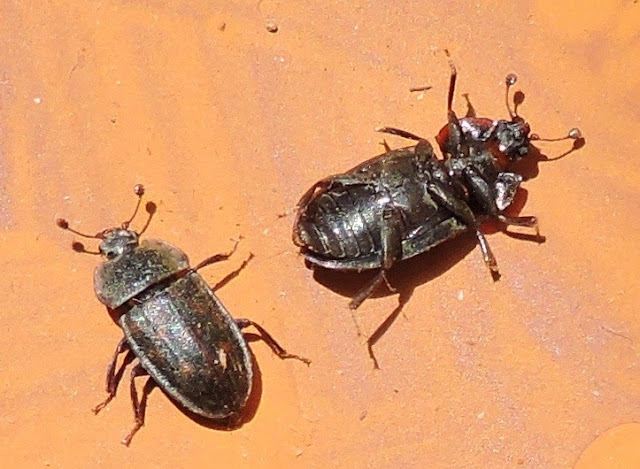 In harvesting the chicken I found a number of these little beetles crawling out from under the shelves.  There are a number of fungivore beetle species and I  thought identification would be a problem but I got an answer from Buggide.net rapidly, Phenolia grossa.  It is in the superfamily Cucujoidea (Sap, Bark and Fungus Beetles) which also contains the common lady beetles (aka ladybugs).


P. grossa is 6-8.5mm and has a cute ball-like knob on its antennae.  They are commonly found on fungi or under bark where they are thought to feed on fungi as well.  Stephen Luk photographed this larval form found in "a crumbly, stinky mushroom. Several were found in association with adult P. grossa."

This Chicken of the Woods mushroom is Laetiporus sulphureus is commonly referred to as a Sulfur Chicken.  Mark had found another chicken mushroom earlier, the white L. cincinnatus earlier and he prepared both for a taste test.  There was very little discernible difference except in the color.  In the field there is a significant difference including their DNA.  L. cincinnatus causes a "brown rot of the butt and the roots" (try to find that on a menu) that occurs at the base of the tree while sulfur chicken is found on the trunk.

Both are good finds and a reason to celebrate.  They can be prepared a number of ways including with pasta, wild rice and on pizza.  With beetles.....not so much.


And from the other Bower, Linda's video on an eclosing Giant Swallowtail.