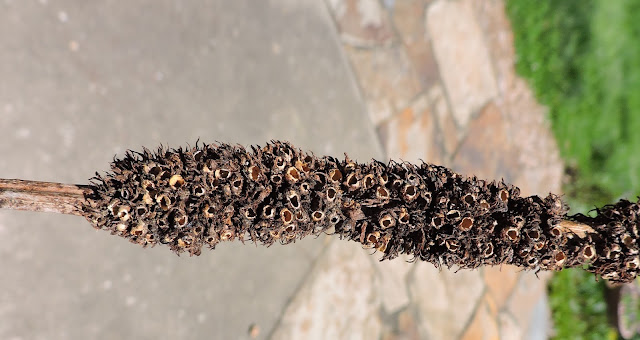 At a scouting camp out Saturday, Dave Shanholtzer gave me this gall puzzle.  It was a dried stem with tiny sharp thorns.  Those thorns and its ribbed five-sided stem were typical of a blackberry cane but what was the gall?


Google "blackberry stem gall" and you get a wide variety of different shaped galls.  A dedicated amateur gall hunter can search for a long time and find little information and then come on a treasure trove such as this natureblog.org posting on blackberry knot galls.  It shows the entire life cycle, unusual in its completeness. 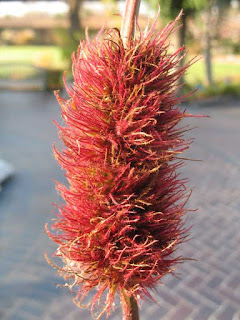 I found Dave's gall in a naturalist's bible, Eiseman's Tracks and Signs.  It is a blackberry seed gall caused by a cynipid gall wasp Diastrophus cuscutae-formis.  Unlike many of the lumpy distortions created by many gall makers, this one is a work of art when it is young.  The Missouri Botanical Garden specimen to the right bears little resemblance to the gnarly gall in hand, once the tiny wasps leave home.

The Linnaean* classification system of genus and species is difficult for many of us.  A search for  D. cuscutae-formis  was complicated by the spelling with the superfluous hyphen, ignored by many sources.  I wasn't able to come up with the derivation of Diastrophus but the cuscutae-formis refers to the gall's resemblance to a cluster of dodder (Cuscuta) fruits which wrap around the host plant.  In this case, each "seed" contains the larva of a tiny wasp, providing shelter, humidity and food.  Eventually the tiny grub-like creature becomes a wasp that chews its way out, and can fly into the world.


A while back, Brandon Butler of the Conservation Federation of Missouri** asked if I hunt.  My first response was "No, I don't any more."  Then I realized that I hunt every day, just different game.  Some times we eat what I find (mushrooms) but more often it is for galls or "catch and release" insects to study.  Now I am off to our blackberry patch to look for my own blackberry seed gall.

*   Linnaeus and his classification system is discussed in this recent New York Times travel story.
** Join us at Explore the Outdoors Springfield with a sneak preview of the WOW museum on June 17th.
Posted by Bob and Barb at 8:52 AM