Life in a Curled Leaf 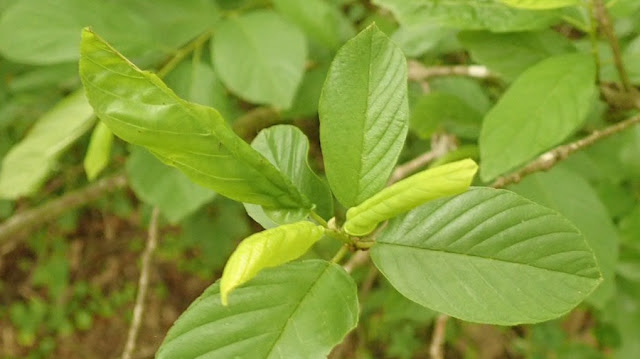 I recently noticed several Carolina buckthorns by our drive along Bull Creek had leaves that were curled up lengthwise. There are a lot of caterpillars that will roll up leaves as a shelter, but when I unrolled these there were small dark ants in side, 3 to 5 per leaf.  It was only on looking at the photographs on the computer that I noticed the aphids that clustered along the middle leaf vein. 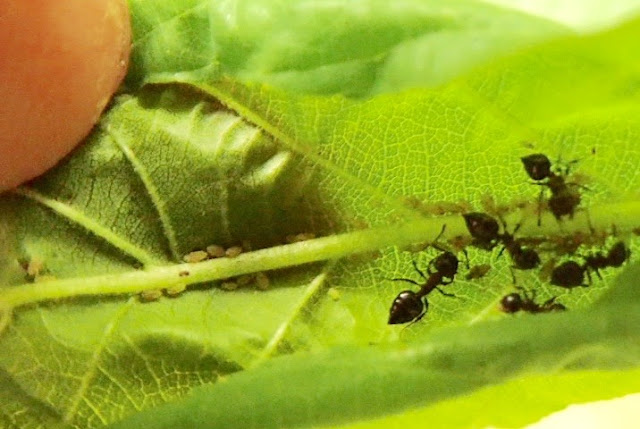 Aphids use their long slender mouth parts to suck fluids out of the leaf, causing it to curl.  This produces a shelter from their natural predators like lacewings and lady beetles.  The aphids produce a sticky secretion called honeydew and that is where the ants come in.  Some species of ants will actually farm aphids, protecting them from predators in exchange for the food.

Although aphids have no significant predator defenses, they make up for it by reproducing in volume.  A leaf curl aphid lays eggs that over-winter, with young male and female aphids appearing in the spring.  After that a female will give live birth to 3 to 4 baby aphids per day, all producing females until she lays a batch of eggs with both sexes in the fall. 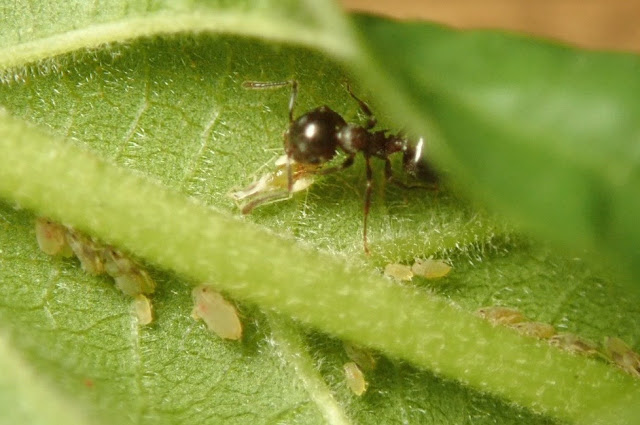 I find that aphids are hard to photograph, generally they are only one color and in this case green on a background of green.  Their pear shaped bodies and tiny legs are hard to capture.  Their distinguishing feature is the pair of tube like structures called cornicles that stick out their hind end.

I sent photographs to James Trager, my favorite myrmecologist, (word for the day- ant scientist).  He identified this species as Crematogaster cerasi, a species of acrobat ant.  A distinguishing characteristic of Crematogaster is the heart shaped abdomen.  The "acrobat" comes from its building of nests primarily in trees.  Other common names are the Valentine ant (see above) and cocktail ants because of their habit of raising their abdomens when alarmed. 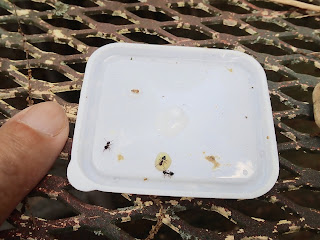 These were very hard to photograph because of their frenetic activity, constantly scrambling over the leaves.  After many tries, I finally used the lid to a bug box  because the trough around the edge could hold water to corral them.  For the closeup portrait I used a drop of honey for it to climb upon.

Most of the resources online are about how to control aphids.  Only we select few must be interested in their place in the food web.  RESPECT THE APHID!  FEED AN ANT!


Detailed information on this ant is at animaldiversity.org
-------------------------------
If you followed saw the Goatweed Leafwing blog last week, you will want to see Chris Barnhart's  updated photo essay with new footage of cats eating and the pupae that resulted, good stuff.  See it here.
Posted by Bob and Barb at 7:11 PM